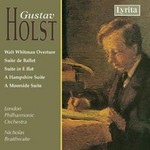 "Nicholas Braithwaite's effervescent 1980 account of the winsome Suite de ballet sounded stunning on black disc and continues to do so on silver (Decca's peerless Kenneth Wilkinson was the balance engineer; the sumptuous acoustic is that of Kingsway Hall). All else is new to the catalogue. The three suites were set down in Watford Town Hall during summer 1993, while the Walt Whitman Overture was taped in the same venue in January 1988. The mind boggles at how performances and recordings of such superior quality can have remained mothballed for so long.
Holst composed the Overture and Suite de ballet during 1899 while on tour as repetiteur and trombonist with the Carl Rosa Opera Company. In neither will you glimpse any vestige of the mature composer (the overture doffs its hat to Brahms) but both parade a host of felicities and are given with palpable dedication here. Gordon Jacob made these skilful and sympathetic orchestrations of Holst's two military-band suites in 1940 and 1945 (with No 2 renamed the Hampshire Suite - the majority of the folksongs it quotes hail from that county). Under Boult, No 1's March bowls along with the greater unbuttoned panache, but there's not much in it.

Commissioned as a test piece for the 1928 National Brass Band Festival, A Moorside Suite has long been a personal favourite (don't deprive yourself of hearing the Grimethorpe Colliery Band's unforgettable 1977 Decca recording, 3/86 - nla). Jacob's affectionate reworking followed in 1952, and Braithwaite and the LPO relish its many deft touches. (On two copies I've tried there's a tiny electronic-sounding blip at 3'04" in the haunting central Nocturne.) Attractively presented (the lucid and detailed booklet-essay is, curiously, uncredited), this release makes consistently enjoyable listening."
(Gramophone)

One of the most respected independent labels, Lyrita Recorded Edition, which will celebrate its 50th anniversary in 2009, has concluded a comprehensive license deal with Wyastone Estate Limited.

The agreement calls for the reintroduction of the entire Lyrita catalogue over the next 18 months. Wyastone will undertake the digitisation of Lyrita's original analogue masters, most of which have never been available on CD, and anticipates that the catalogue will then exceed 130 titles.

There have been few (if any!) independents that have specialised in British music to the extent and with the devotion and flair that Lyrita has. The consistent approach and high standards of its founder, Richard Itter, has produced a remarkable catalogue which includes many world premieres and composer-conducted recordings. His pioneering efforts on behalf of Arnold, Alwyn, Bax, Finzi, Foulds, Holst, Ireland, Rawsthorne, Rubbra and Wordsworth, (to name only the most familiar) set a benchmark for technical quality and musical judgement.

In order to satisfy international demand for the label, Wyastone and Lyrita have agreed to introduce simultaneously physical product, which will be widely distributed, available directly and via the Internet, and a downloading facility. CDs and booklets will be made using Wyastone's short-run manufacturing operation (which already supports several labels including Nimbus, Saydisc and Quartz); the domain name lyrita.co.uk will be reactivated and the Independent Online Distribution Alliance (IODA) will support the downloading service.