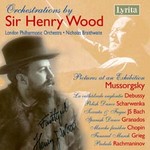 "This well filled and well recorded disc deserves success. I hope that it will soon be followed by recordings of some of Sir Henry's other arrangements"
(MusicWeb Sept 2007)

Sir Henry Joseph Wood Kt CH (3 March 1869 - 19 August 1944) was an English conductor, forever associated with the Promenade Concerts which he conducted for half a century. Founded in 1895, they became known after his death as the "Henry Wood Promenade Concerts" (now the "BBC Proms"). He had an enormous influence on musical life in Britain: he improved access immensely, and also raised the standard of orchestral playing and nurtured the taste of the public, introducing them to a vast repertoire of music, encouraging especially compositions by British composers. He was knighted in 1911.
(Wikipedia)

Symphony No. 1 / Concerto in D for string orchestra / Jabez and the Devil-Suite