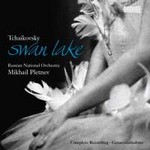 "This is a performance that ballet lovers and Tchaikovsky fans alike can appreciate and enjoy without hesitation."
(9/9 ClassicsToday.com)

"Mikhail Pletnev really is a fine ballet conductor, far more successful at characterizing short genre pieces than at sustaining the symphonic drama of large movements in sonata form. Witness how well his cool demeanor, emphasis on precision, and preference for fleet tempos serves the music of Swan Lake, in stark contrast to his dull versions of the same composer's symphonies (save for his first recording of the Sixth for Virgin Classics). Right from the first act's initial Allegro giusto, with its tight and vivacious string ensemble, it's clear that this will be an excellent performance. Pletnev follows with an elegantly lilting Valse and some really energetic characteristic dances in the latter half of Act 3.

Happily, he also allows himself a welcome degree of freedom in the ballet's more lyrical moments. Even if the strings aren't quite as luscious as they might be in the Big Tune (as we find in, say, Boston or Philadelphia), they still play with plenty of power, and Pletnev's treatment of the brass and percussion in the final apotheosis is as intelligent as it gets--extremely powerful, yet with a clarity that banishes any suggestion of empty bombast. The sonics are also very good--vivid and slightly dry--and suit the interpretation quite well. In short, this is a performance that ballet lovers and Tchaikovsky fans alike can appreciate and enjoy without hesitation."
(9/9 ClassicsToday.com)

This CD release has the potential of becoming a new reference recording: it features star conductor Mikhail Pletnev and the Russian National Orchestra with the complete Swan Lake by Peter Tchaikovsky - an absolute masterpiece of Russian orchestral music.

Swan Lake has come to be regarded as the very quintessence of Russian ballet, and its music benefits from an unchanged popularity worldwide and among a wide range of audiences.

The CD release marks the 20th anniversary of the Russian National Orchestra; since being founded by Mikhail Pletnev in 1990, the RNO has quickly reached a position at the top of Russian orchestras, as well as among the top ten of international orchestras (as listed by Gramophone).

This is Mikhail Pletnev's and the RNO's debut on Ondine.

The Quest (complete ballet) / The Wise Virgins: Suite from Ballet