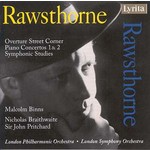 "It's not the only performance of course. You can find competing and newer recordings on Chandos and Naxos. All three are excellent and recommendable. But these performances are as fine as any and the Studies is a truly compelling performance."
(MusicWeb Oct 2007)

"More rich fare for the British Music Collector comes in the shape of the two Rawsthorne concertos, his zesty 1944 overture and one of his major statements, the Symphonic Studies.

I've always thought the Studies his masterpiece, a truly cogent, impressive and tensile work that wears its academic title with almost ironic brilliance. Fortunately the studies are separately tracked so we can enjoy their creative brilliance at will. The Allegro di bravura is an exercise in sheer vivacity, emotionally coiled and passionate. Pritchard drives it with masterly control, broadening tellingly for the Allegretto which is notable in this performance for its palpable sense of unease. No less important is the expressive trawling of the Lento - reserved but active, and characterised with real acumen. By the time we reach the Allegro piacevole things are really heating up. The winds and the rugged bravado of the brass make their important presences felt. The sense of accomplishment is brilliantly realised in this triumphant performance. The Street Corner overture is both brilliant (again) and genial with the habanera kick and the loquacity of the writing brought out with undisguised glee.

The First Concerto was written in wartime, two years earlier than the overture. Wittily brusque it sports baroque tinged amulets. But that's not nearly the full story of course; the Rawsthorne trademark "pawk" is here but subsumed in the toccata flourishes of the piano writing, which fully meld and mesh with the surrounding material. It's all perfectly judged. The central Chaconne unfolds with grave, slightly removed intimacy, the piano commenting or stating according to the music's dictates. And the Tarantella finale is puckish and vital, the percussion section triumphant and the brass blistering as they play the Spanish Republican Bandiera Rosa. Don't miss the deft Haydnesque throwaway punch line either.

The 1951 Concerto opens in decidedly Francophile fashion before the orchestration begins to deepen and thicken. There's more of a florid element than there had been in the sparer textures of the earlier concerto. But there's still the insouciant, almost cocksure writing for the protagonist and the sense of interior introspection as well. The second movement is a study in contrasts, from lightness and delicacy to more boorish outbursts. But I think most ears will be drawn to the moments of sublimated Bachian reflectiveness in the slow movement where Binns is supremely eloquent - nostalgic, romantic but, as well, embracing more scherzando sections. The finale opens boisterously but not facetiously, admitting introspection as well as self-assertion. In general the ebullience of the writing acts as a tonic and the performance is vital and exciting.

It's not the only performance of course. You can find competing and newer recordings on Chandos and Naxos. All three are excellent and recommendable. But these performances are as fine as any and the Studies is a truly compelling performance."
(MusicWeb Oct 2007)