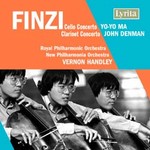 "These recordings - sounding handsome still - derive from two Lyrita Recorded Edition LPs issued 1976-79. The Clarinet Concerto comes from SRCS 92 where it was alongside the two piano-and-orchestra works already used as fillers for SRCD 239."
(MusicWeb Recording of the Month June 2007)

"Both of these Finzi concertos are eloquent works that deserve the widest circulation. These recordings are jewels in the Lyrita catalogue, now being issued on CD for the first time. The Cello Concerto was Yo-Yo Ma's first commercial recording and revealed him as a player of the front rank, and John Denman's marvellously fluid reading of the Clarinet Concerto has never been equalled."
(Dominion Post Recording of the Year 2007)

"While short and easily digestible orchestral meditations have been in the vanguard of the Finzi revival there's a great deal more to his music and reputation. The present two substantial concertos are as ikonic of Finzi as his Intimations of Immortality. They are both late works: 1949, 1956 and were written during a period when the curtains of a new orthodoxy of dissonance were drawing closed. He must have wondered how his music would fare. His fears were borne out until the 1970s.

In the clarinet work Finzi is fully at ease in both the contemplative and stingingly exuberant moods. He moves between them seamlessly. The strings in this version of the Clarinet Concerto are marvellously airborne - floating as they sing; singing as they float. As for John Denman's clarinet it sounds out in a truly mellifluous - the word seems custom-made for this work - aural pantone. He makes of the instrument's vocal donné; something touching on the profound. While he lacks the wondrously grating woodiness of Stoltzmann - who can be heard in this work again on an ArkivCD reissue - Denman has the full measure Finzi's invocational cantilena. He catches that sense of the pastoral mystic at prayer - ecstatic in soliloquy and in irrepressible delight.

Yo-Yo Ma's remains the touchstone performance in the Cello Concerto. This was his first commercial recording. Regrettably he has not returned to the work since those heady days of 1978. This work reaches out in two directions: towards the Dvořák on one hand and the Elgar on the other. It is a rapturously lovely piece and one can only wonder at its neglect. The first movement is ambitious, churning with dark emotions and at times a roaring protest - at what? Interesting to hear that brief Tallis Fantasia recollection at 6:35 in I. Tragedy is put to one side in the Andante quieto with a typical sauntering heart's-ease pastoral melody. The finale enters unconventionally with a spatter of pizzicato from the soloist limning the theme to come. When that theme comes it is every bit as fine if not finer that the one that sings out its confident heart in the Clarinet Concerto finale. It's a gift of a melody and Finzi will not let go of it. He finds ways of ringing the changes, of grafting on new growth in the same way that he worked with his apple trees. The optimistic benediction of the theme moves with deliberation yet with wings. It is borne up by the feeling of something approaching a rumba. Time and again there are wonders to hear. Try for example the way the oboe entwines like ivy around the cello line; lost in sloe-eyed praise around the soloist's rapturous address. Its effect is, for all the world, like those stone hounds seen gazing upwards in eternal devotion at their lord's feet in medieval churches.

Throughout both works Handley is attentive and offers, with his two orchestras, the most imaginative and well shaped support.

The composer heard a broadcast of the Cello Concerto in his Oxford hospital bed as he lay mortally ill with leukaemia. Perhaps we can hope one day for a company such as Symposium to issue a broadcast tape of the premiere as originally played by Christopher Bunting.

These recordings - sounding handsome still - derive from two Lyrita Recorded Edition LPs issued 1976-79. The Clarinet Concerto comes from SRCS 92 where it was alongside the two piano-and-orchestra works already used as fillers for SRCD 239. The Cello Concerto was issued by itself on the LP SRCS 112.

In May 2007 the present disc will be joined by SRCD.237 which will allow the listener at last to hear Lyrita's orchestral versions of Let us Garlands Bring; Two Milton Sonnets; Farewell to Arms and In terra Pax (Carol Case/Partridge/Manning/RPO/New Philharmonia/Handley).

The CD cover of this issue is based on the detail of the original LP of the Cello Concerto with Yo-Yo Ma caught in session.

Lyrita are making the choice of Recordings of the Year very difficult. If they keep up their present pace we will have had 72 CDs issued by January 2008. They have set themselves a cracking pace. Let's hope they have the stamina to continue. Meantime celebrate and add this to your collection in pride of place alongside the versions by Tim Hugh and Raphael Wallfisch."
(MusicWeb Recording of the Month June 2007)