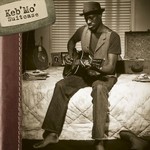 This is the highly anticipated new studio album in 2006 from three-time Grammy winning artist Keb' Mo' - his first release of original music since 2004's 'Keep It Simple'.

Keb' Mo' draws heavily on the old-fashioned country blues styles, but keeps his sound contemporary with touches of soul and folksy storytelling. "The blues", he says, "is my history, my culture. It's always been around me. I always wanted primarily not to be a blues guy, but a songwriter.