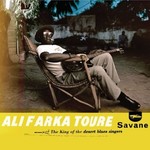 Touré's swansong is a remarkable magum opus. In many ways 'Savane' is the most traditional, and most different recording he ever made, with wonderfully contrasting sounds and textures.

"So often albums released shortly after the death of an artist aren't very good, getting by on sentiment rather than content, and cobbled together from incomplete recordings that would otherwise never have seen the light of day. No such problems with Ali Farka Touré's swansong. Once he knew he was dying, he was determined to leave a fitting final testament. When he finished, just a few weeks before he died, he knew that he had recorded his magnum opus.

In many ways 'Savane' is the most traditional record he ever made; at the same time it's also his most different. That's apparent from the first track - "Erdi" - which opens with the scratchy sound of a couple of ngonis (plucked lute) and the one-string njarka (fiddle) before the wailing blues harp of Little George Surreff takes up the theme. Ali then picks out a hypnotic guitar riff and begins to rap a deep-throated vocal of defiant power and conviction.
Savane is as pure and deep an expression of the blues as you will ever hear - up there with the unearthly recordings of Robert Johnson or early Muddy Waters. Yet it is also an album of wonderfully contrasting sounds and textures. "Beto" features the smouldering tenor sax of Pee Wee Ellis to devastating effect. Listen to the reggae lilt of the title-track and you'll be convinced that the rhythms of Jamaica also originated in Africa. The rustic-sounding "Penda Yoro" finds the ngoni pickers to the fore again, and you can hear where the Appalachian banjo has its roots.

And that's the most extraordinary thing about this remarkable recording. It seems to tap into some rich, deep and unfathomable spiritual source from which, in the distant mists of time, all music must originally have flowed. Right now, 'Savane' genuinely does sound like the best album I've ever heard."
- Nigel Williamson (Songlines)

"Ali Farka Toure was a true original. An exceptional guitarist, he transposed the traditional music of his native north Mali and single handedly brought the style known as desert blues to an international audience.

Toure was born in 1939, and by the mid-'60s had mastered many instruments including guitar, njarka (a single-string African fiddle), ngoni (four-stringed lute) and the Peul bamboo flute. During the 1970s he played regularly on Radio Mali, blending his established style with acoustic blues. He released relatively few recordings over the next two decades but performed regularly and gained great respect from musicians and audiences alike.

In 1990, Toure withdrew from his musical career to grow rice on his farm, but was coaxed back to the studio in 1994 for 'Talking Timbuktu'. Produced by and featuring Ry Cooder, this remarkable album has Toure singing in 11 languages, playing acoustic and electric guitar, six-string banjo, njarka, and percussion instruments. 'Talking Timbuktu' also boasted the talents of jazz bassist John Patitucci, drummer Jim Keltner and guitarist Clarence "Gatemouth" Brown.

It became his most popular and highly rated album, earning him a Grammy for "Best World Music Album", proving that traditional "real" music could be embraced by a wide audience. However, Toure again became reclusive and didn't release anything until 'Niafunke' in 1999.

In February 2006 he won his second Grammy award for the brilliant 'In The Heart Of The Moon', in collaboration with Toumani Diabate. Toure had been working on his final solo album while suffering from cancer, but sadly he died in Mali on March 7th 2006. Ali Farka Toure was a giant of African music and will be missed by many people throughout the world."
- GEOFF

The Rough Guide to African Blues

Based On a True Story
more suggestions…