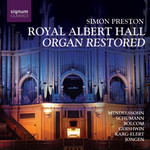 "About £1.7m has been spent on refurbishing this illustrious instrument, and it sounds wonderful in Preston's performances of a repertoire designed to show off its versatility"
- The Sunday Times

"The CD makes an excellent companion to Dame Gillian Weir's very recommendable disc for Priory on the same organ. Mike Hatch's recording is a bit brutal compared to the more spacious Paul Crichton effort for Priory. But it is impossible to choose between the two new releases featuring this remarkable instrument; best to buy both I would suggest."
(MusicWeb August 2006)

Since the Royal Albert Hall organ was inaugurated by W.T.Best, the most famous performer of his day, in the presence of Queen Victoria on the 29th March 1871, it seems appropriate to begin this programme with one of Best's own organ transcriptions: the Overture to Mendelssohn's Oratorio St. Paul. Mendelssohn's own performances of Bach on the organ in St. Paul's Cathedral and elsewhere during the 1830s had been wildly acclaimed by the crowds who came to hear him and Best took full advantage of the enormous surge in interest in performances of music arranged for the organ. After the Mendelssohn Overture it is but a short step to the symphonic nature of Schumann's Six Fugues on the name B-A-C-H, to which the wide dynamic range and sonic possibilities of the Albert Hall organ are ideally matched.

In the Bolcom Fantasia, the composer fuses a modern compositional idiom with two Southern Spirituals, breathing new life into both forms with shattering effect; in a way the same thing has happened to the Albert Hall organ, and with modern blowers for the bellows taking the place of the original steam engines of 1871, it certainly has enough wind now to cope with most contingencies - as you will hear.

In America the traditions of theatre organ playing are still kept very much alive. As a child I remember playing two very old records over and over again on a wind-up portable gramophone - the sort that had wooden needles which you had to keep sharpening.

The first was George Thalben-Ball playing The Ride of the Valkyries on the Alexandra Palace organ, and the other - equally favourite - was Quentin MacLean playing Gershwin's Rhapsody in Blue on the organ in the Odeon Marble Arch. At the age of five I could not work out how Quentin MacLean did the opening glissando in Rhapsody in Blue; apparently he used the Siren stop - useful for Cops and Robbers chases in the silent movies - switched the organ on and, when the wind went into the bellows, it produced this very smooth glissando up to the top E flat!

Joseph Jongen and Siegfrid Karg-Elert were near contemporaries, and although generally regarded as organ composers, both were prolific in other forms: symphonic music, choral and chamber music and even opera. Jongen's music is most fastidiously composed and the architectural shape and grandeur of the Sonata Eroïca is in wonderful contrast to the quite unexpected delicacy of Karg-Elert's Valse Mignonne; here the extremely discerning listener may pick up some unexpected sounds of the gentler percussion stops on the enclosed Solo division of the Albert Hall organ.
(Simon Preston)