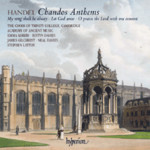 "Stephen Layton directs the small forces of the Academy of Ancient Music with precision and tact."
(MusicWeb May 2009).

"Stephen Layton directs the small forces of the Academy of Ancient Music with precision and tact."
(MusicWeb May 2009)

In a year of Handel celebration and many new recordings, this is a welcome addition to the discography. Stephen Layton, the Academy of Ancient Music, the Choir of Trinity College, Cambridge, and a stellar group of soloists-in fact, the best in solo Handel singing that this country has to offer-present a disc of three of the Chandos anthems which is sure to achieve the same critical and public acclaim as the recent Dettingen Te Deum from Trinity.

Here we have the composer at his most English and most gently appealing. Written for the musical establishment of the first Duke of Chandos, these anthems set texts taken from the Psalms, mainly the old version of the Psalter as preserved in the Book of Common Prayer, but also the metrical versions of Nahum Tate and Nicholas Brady, first published in 1696. The anthems have no direct models in English church music, but follow the form used by Handel for his Latin psalm settings, with a mixture of movements for solo voices and choruses. The expressive range of the solos is remarkable, and in the choruses Handel seizes every opportunity to create grand effects with modest means

O praise the Lord with one consent 'Chandos Anthem No 9', HWV254