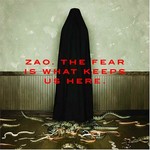 Zao
The Fear is What Keeps us Here

'The Fear is What Keeps us Here' combines the dark and creepy vibe of early albums, with the rock n' roll thunder and metallic fury of more recent outings - a return to form as many in the hardcore scene would have it.

"If Killswitch Engage own the melodic end of the kingdom then the extreme end belongs to Zao. No question."
- Metal Hammer

A dark new chapter in the unstoppable saga that is Zao . 'The Fear Is What Keeps Us Here' is a raw, unbridled testament to the power of Zao - the power that influenced the likes of Unearth, Killswitch Engage, As I Lay Dying, Thrice and more! Zao has spent the past 10 years at the forefront of the metal and hardcore scene. Through breakups, reformations and countless tours; the band has exposed their beliefs and their hearts to the fevered masses.

'The Fear is What Keeps us Here' combines the dark and creepy vibe of early albums, with the rock n' roll thunder and metallic fury of more recent outings - a return to form as many in the hardcore scene would have it. This time around, famed recording engineer Steve Albini invited Zao to make their new album with him at his Chica go studio and the band - all four long time fans of Steve's many recordings - gladly obliged. With an album's worth of songs fine-tuned over several months, lyrics and vocals stronger than ever, the band laid down what promises to be another landmark work.

Many luminaries of today's heavy music scene are well aware of their debt to the band : Underoath and Unearth have proudly opened for Zao; Thrice and Fall Out Boy eagerly admit o listening to Zao when growing up; As I Lay Dying invited Zao's Dan Weyandt to guest on their last album and they've also been joined onstage by Trivium's Matt Heafy.

"Zao once again sound inspired and focussed, which are two qualities that have been absent for far too long for a band of such immense influence."
- The Metal Forge (4 stars)

"A fully-blown discordant crescendo… biting enough to peel the skin off a grown man's face."
- Chronicles Of Chaos

1. Cancer Eater
2. Physician Heal Thyself
3. Everything You Love Will Soon Fly Away
4. It's Hard Not To Shake With A Gun In Your Mouth
5. Kingdom Of Thieves
6. Killing Time Till It's Time To Die
7. There Is No Such Thing As Paranoia
8. Pudgy Young Blondes With Lobotomy Eyes
9. My Love My Love (We've Come Back From The Dead)
10. American Sheets On The Deathbed
11. Last Time For Everything