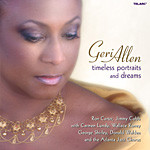 This is an amalgam of original compositions, jazz standards and spirituals - Allen's acknowledgment & affirmation of artistic, historical and even spiritual connections that have made Jazz the powerful cultural force it has become over the past century.

Pianist Geri Allen's 2004 Telarc debut, 'The Life of a Song', garnered well-deserved praise from all corners. The New York Times called it "her best in years,” while JazzTimes called her compositions "fresh” and "distinctive.” ICE compared her playing to that of Bill Evans and Herbie Hancock, but suggested that her original compositions "were inspired by deeper, more personal connections.”

These deep and personal connections are at the core of Geri Allen and her music. 'Timeless Portraits and Dreams' is far more than just another installment in her twenty-year body of work. An amalgam of original compositions, jazz standards and spirituals, the album is Allen's acknowledgement and affirmation of the artistic, historical and even spiritual connections that have made jazz the powerful cultural force that it has become over the past century.

"Jazz embodies all that is the best in us,” says Allen. "Because it is a clear reflection of who we are, jazz can also reflect the wide range of human strengths and frailties. In jazz, we have complete freedom of expression…At its best, we move out of the way and become vessels ready to receive, vulnerable, and open to divine influence.”

Allen is joined by a stellar group of supporting players. Rounding out the core trio are bassist Ron Carter and drummer Jimmy Cobb. In addition, the roster of special guests includes vocalists Carmen Lundy and George Shirley (the first African-American tenor to sing at the Metropolitan Opera), trumpeter Wallace Roney, tenor saxophonist Donald Walden and the Atlanta Jazz Chorus (under the direction of Dwight Andrews).

The set opens with the distinctive medley of "Oh Freedom/Melchezedik,” two compositions penned by Allen. Her syncopated piano chord blocks on the opening spiritual segue into a more rhythmic and melodic groove that is underscored by Ron Carter's occasional bass passages weaving in and out of the subtle backdrop of color provided by the Atlanta Jazz Chorus.

"Portraits and Dreams” is a midtempo straightahead jazz number that features Allen's piano working in solid tandem with her trio. The rhythm and tempo are fluid, but the piece holds together thanks to the consistent underpinning provided by Carter and Jimmy Cobb.

Allen's rendition of George Gershwin's classic "Embraceable You” is gentle and melodic, filled with embellishments that are always tasteful. Allen's rendition of the tune was inspired by Herbie Hancock's version first aired on his 1998 opus, Gershwin's World. Carter and Cobb are ever present in this quiet track, but never obtrusive. Immediately following is a spirited take on Charlie Parker's "Ah-Leu-Cha,” energized and filled with a rhythmic tension that perfectly offsets the preceding Gershwin tune.

The home stretch includes the title track, "Timeless Portraits and Dreams,” a composition penned by Allen with rich vocals by Carmen Lundy. The lyrics deftly compare dreams to rivers and streams - some small and others big, sometimes moving separately and sometimes flowing together, always moving toward tomorrow regardless of obstacles.

The album also includes a bonus disc that features tenor George Shirley delivering a stirring rendition of "Lift Every Voice and Sing,” the hymn by James Weldon Johnson and John Rosamund Johnson. Written in the 1920s and perhaps the best known of the Johnson brothers' collaborations, "Lift Every Voice” became known in subsequent decades as the "Negro National Anthem.”

Whether the context is spiritual or secular, Allen adheres to the premise that there is a transcendental element in jazz - one that conjures portraits and dreams that connect both performer and audience to each other, to the past and to the future.

"It is the intention behind the note that distinguishes a music's spirituality,” she says. "It is the intention behind a thought, a word, a song, or an improvised expression that frames the performance. It is within this reality that Timeless Portraits and Dreams lives, and why each musical portion, along the 'journey' which is this recording, belongs together as cohesive parts of the whole.”