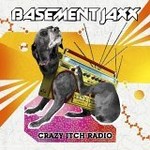 Brixton-based house production duo, Basement Jaxx have turned dance music inside out and continue to drop new ever more exciting sub-cultural car crashes on airwaves & dancefloors around the world.

Basement Jaxx are, to use a jaxxy turn of phrase, on fire. In 2005 Felix Buxton and Simon Ratcliffe sold over 800,000 copies of their album 'The Singles', racked up a technicolour storm at Glastonbury and generally reminded everyone what a vibrant force they'd been for the past decade. In NZ alone Basement Jaxx have a couple of gold and platinum albums under their belt.

Now it's time to feel their super fresh Basement Jaxx flow once again with 'Crazy Itch Radio', recorded in their home studio with a cast of super-talented fresh blood. So what about the title, Felix? "We've all got the crazy itch. You could be in Hawaii on the beach and still get a mosquito on your neck. It's the crazy, colourful itch of life."

Rammed up next single "Take Me Back To Your House", is a sexy, energetic moment of what they call "banjo house". There's also Balkan folk woven into vocals from Swedish pop sensation Robyn [on "Hey U"], a hyper grime tune cussing vain boys from East London's Lady Marga, titled "Run 4 Cover" and "Lights Go Down" with legendary British singer Linda Lewis - plus a special little treat tucked away at the end.

"This feels like what we do best. It's soulful, soothing and warm and has a beauty which 'Remedy' had."
- Basement Jaxx