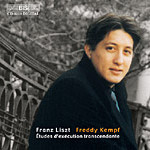 Freddy Kempf is one of the world's finest and most sought-after young pianists. He was born in London in 1977 and came to national prominence in 1992 when he became the youngest winner in the history of the BBC Young Musician of the Year Competition. His first public appearance, however, was at the age of four and a half in a church in Folkestone, England. His award of third prize in the 1998 Tchaikovsky International Piano Competition in Moscow provoked protests from the audience and an outcry in the Russian press, which proclaimed him 'the hero of the competition'; his unprecedented popularity with Russian audiences has been reflected in several sold-out concerts and numerous television broadcasts of his performances. His triumphant return visit to Moscow the year following the competition for solo and concerto appearances prompted the headline: 'Young pianist conquers Moscow' in the International Herald Tribune.

He has appeared with major orchestras and conductors all over the world - including a month-long tour of Japan (which included solo and orchestral concerts culminating in a recital at Tokyo's Suntory Hall that was broadcast on radio and television) and a fifteen-concert tour with the Moscow Radio Symphony Orchestra under Vladimir Fedoseyev - and played at such venues as London's Wigmore Hall, New York's 92nd Street 'Y', the Salzburg Mozarteum, the Musikhalle in Hamburg, the Tonhalle in Zurich, and at festivals including the Cheltenham Festival and La Roque d'Anthéron Festival.

Freddy Kempf records exclusively for BIS Records, and is represented on recital discs of Beethoven, Chopin, Liszt, Rachmaninov, Prokofiev and Schumann. In 2001 he was voted Best Young British Classical Performer in the prestigious Classical Brit Awards.

In May 2007 Freddy toured with the New Zealand Symphony Orchestra.

Pictures from an Exhibition (with works by Balakirev & Ravel)
more suggestions…