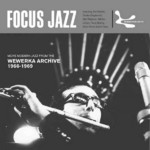 This CD has everything; up tempo big band jazz with blinding horn solos, middle eastern fertility dance grooves through to mellow ballads. The sound quality from the sessions and off the CD is first class. All tracks are original...

"This CD has everything; up tempo big band jazz with blinding horn solos, middle eastern fertility dance grooves through to mellow ballads. The sound quality from the sessions and off the CD is first class. All tracks are original and have not been re-mixed with beats added. Raw, seat of the pants jazz.”
- Mark Robinson, 'It's A Jazz Thing' host, George FM

"I can't remember.” This is the statement you're most likely to hear from producer and publisher Hans Wewerka when you ask him about specific moments in his long career. This has nothing to do with old age – although he is well into his 80s, apparently he's still a sight to behold! No, it has more to do with the fact Wewerka supervised more than 20,000 recording sessions – many of them arranged ad hoc, late at night after a gig. So you can imagine his archive…

So, here is the second volume in the series of findings from the (more than) extensive Wewerka archive. For this compilation, the Jazzanova collective and Stephan Steigleder descended even deeper into Wewerka's Munich vaults. This edition bears further testimony to the fact that only a percentage of the history of Jazz is known and that much of it still slumbers in archives - there are a lot of secrets still to uncover - thanks to people like Hans Wewerka.

This volume has focused on two main themes: soundtrack music and Wewerka's forays behind the iron curtain - explaining why so many of the tunes found here have a certain "darkness” to them - and also Jazz in Eastern Europe.

Wewerka often recorded musicians on recommendation without knowing what they played, or maybe thanks to a chance meeting with musicians who were in the studio next to his - and "…some I had heard on records. And when I liked what I heard, I said: I'd like to record this musician. Get me that guy!”

'More Modern Jazz From The Wewerka Archive 1966-1969' once more shows us what talent there is in the world and how much of it goes by unrecognised by the masses. Thus, a heartfelt thanks should be addressed to the enigmatic Hans Wewerka for preserving this wonderful and wondrous music!

May the years to come be filled with more exploits from his vast archive - and the man himself has no problem with that: "We still have so many recordings that we could provide the world with exciting music for decades to come!”