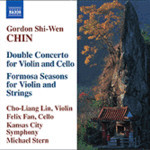 "Formosa Seasons" is based on a series of Haiku-like poems, and is dedicated to the celebrated Taiwanese-American violinist Cho-Liang Lin.

Gordon Chin was born in 1957 in Taiwan, and is among the most active composers in his native country. His compositions include four Symphonies, a Cantata, Violin Concerto, Piano Concerto, numerous choral works, chamber works, five percussion quartets, and works for solo instruments. He has a DMA degree from the Eastman School of Music, where he studied with Samuel Adler and Christopher Rouse, and serves as music director of the Yin-Qi Chorus and Symphony Orchestra in Taipei, where he is a faculty member of Taiwan National Normal University. Gordon Chin's works have been performed worldwide by ensembles such as the Vancouver Symphony Orchestra, the Asia Pacific Orchestra in Los Angeles, the San Diego Symphony Orchestra, the Yuodia Chorus and Orchestra in Tokyo, Ensemble 2e2m of France, and the Amadinda Percussion Group of Hungary, among many others.

Commissioned by Mr. and Mrs. Chris Fan and Ms. Judy Lee and completed in 2002, my Double Concerto was especially written for the violinist Cho-Liang Lin and cellist Felix Fan. There are four movements to the concerto. Each movement has an appropriate title inherently tied to the music. The integrity of the music is perhaps accomplished more through an establishment of emotional connection than analytical cohesion. To clarify, I should like to draw a parallel between music and poetry. In his 1973 article The Anxiety of Influence, John Hollander said literary critic Harold Bloom's interest has never been in the formalist study of poetic language and structure. "In all the years I have known him (Bloom)," Hollander observed, " he has responded to and worked with what we might call the deep structure of poetry, with intentions, impulses, envisionings and desires, rather than with the linguistic surface, which for most of us - poets and critics and readers alike - is all there is to talk about." The "deep structure" Hollander pointed to is the kind of emotional connection that I alluded to, the kind of connection to be realised by not only analytical and structural designs, but also, more importantly, underlying emotions and spirits of the human heart. For that, the connectedness can only be made when the composer, performers, and listeners alike experience the same level of emotion.

Drifting Shadow: This movement has an A-B-A structure. Two soloists represent conflicting mind-sets of one person or a brief documentation in that debate between the body and the soul. In both A parts, a brief and unstable state of peace/compromise is expressed, and in the B part conflict is magnified.

A Flowering Sacrifice: When flowers wither and scatter on the ground, the earth becomes an altar. To atone for the pain of losing oneself, not unlike that of the alchemist, for all our expenditure of physical and emotional energy, we are left with nothing but piercing pain. With the sin of false promises and further deception, we continue to witness the flowering sacrifice until the day we are united with the flowers on the altar.

In Expectation: This movement has a style of a Rondo. Rhythm is crisp, musical phrases are easy going, and the tempo is fast-moving. Life is full of joys, even if it is only serendipitous. For some it is nothing but a vain bubble, for others the elixir vitae does exist.

Yearning: A Sweet Torture: "It is that of an unsatisfied desire which is itself more desirable than any other satisfaction." I thought quoting C.S. Lewis should be the best way to explain the title of this movement. Unlike Love Alchymie, which ignored the discrepancy between his expectations and actuality, C.S. Lewis thinks the form of the desired is in the desire. C.S. Lewis is talking about joy, and since it is of an "unsatisfied desire", to use it to explain "a sweet torture" should be appropriate. Musically I use accelerated tempo to symbolize an ever increasing intensity of the yearning. Since the tempo is almost always changing, it is very unsettled. The movement starts with a slow tempo, and always works its way back to the original tempo between and after two large scale accelerations.

Formosa Seasons was commissioned by Joan and Irwin Jacobs (Founder of Qualcomm) and dedicated to Cho-Liang Lin. The original idea of the piece came about five years ago, when Cho-Liang Lin asked me to write a concerto for violin and strings that could be performed without a conductor. Lin wanted to include the piece in a programme with Vivaldi's Four Seasons. Well, there had been quite a few performances of Formosa Seasons since it was completed, but there was only one occasion when Cho-Liang Lin appeared with the Seattle Symphony Orchestra that Formosa Seasons was actually paired with Vivaldi's Four Seasons.

Formosa Seasons is based on a set of poems that I wrote under the same title. Except the 'summer', which is my own childhood remembrance in my hometown Dou-Liu, in Yun-Lin County, Taiwan, the other three poems are reflections on the short trips my family took to the National Yang-Ming Park in Taiwan. These poems are depictions of the time my family shared throughout the changing of the seasons. I could remember the sound of the wind, and the smell of the trees; I can easily recall the beauty of the twilight, the intense loneliness in gazing at it, the joyful laughter of my children, and their for ever happy footsteps. My children's enthusiastic embrace of nature, their childhood and time has always served as a source of comfort and inspiration to me.

The first movement is 'Summer' and not 'Spring', mostly because I do not want the work to culminate in the nostalgic elements that come with 'Winter.' Below is the translation from Chinese to English of each season.

Listening to the crickets

Returning from a mountain hike with
A lonely wild flower, that recaptures
A song collected in childhood, made me
Gaze backward and listen
To the decayed wilderness

An intense shrill tails after tenderness
Tramples into the heart
Abruptly

In the wind
Withered leaves tremble with men
The afterglow of Mt. Datum
Cooled, and hardened into a
Sickle that slashes across the
Fading coastline
Leaves behind
A single

As not-so-young a composer, I think finally that most of the elements of showboating are dismissed in my works. As the poet Robert Hass described poems of Bishop and Schuyler, I hope I am also beyond that 'impulse'-the exuberance of young artists coming to the medium. In a way I am returning to the primitive instinct in my composition, relying on heart and ears to engage in the process of imaging new patterns and making sense of these patterns. To determine the meaning of music, especially new music, I think one must strip off unnecessary gestures, extravagant outer shells, and return to the essentials with confidence.

I recall with gratitude my meeting with Mr. and Mrs. Irwin Jacobs, who graciously commissioned the work, at its première in San Diego. I am most impressed with their warmth and their genuine love for music. This concerto was also funded in part by the Taiwan National Culture and Arts Foundation. The dedication to Cho-Liang Lin is a tribute to his incredible musical gifts, his enthusiasm for new music, and his inspiration, without which this work would not have been possible.