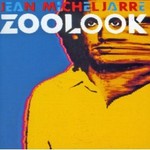 This outstanding recording from Jarre was originally released in 1984 and features a mind-boggling cast of guests - Adrian Belew; Marcus Miller; Yogi Horton; and Laurie Anderson all appear.

"After holding off for over 20 years, I finally fell to the other day and for the very first time listened to Jean Michel Jarre's 1984 release, 'Zoolook', and in particular this re-mastered edition... I'd heard it was really good, but just never gotten around to checking it out. To say I was blown away is an understatement.

'Zoolook' features a calibre of guest appearances that boggles the mind - Adrian Belew; Marcus Miller; Yogi Horton; and Laurie Anderson all appear. Their evocative contributions are faultlessly worked into the varied soundscapes of vocal samples (recorded in 25 different languages) & FX that our hero used, with the aid of the then new Fairlight synthesizer (plus numerous other keyboards and hi-tech gear), to construct this intriguing musical collage. Some of the pieces here are purely Jean Michel by himself too, and they are equally awesome in their own special way.

To tell the truth, I wasn't expecting this album to be so much of a departure from the sound of my all-time favourite Jean Michel recordings: 'Oxygene' & 'Equinoxe', but then I guess that's half the reason why this old gem is regarded as such an outstanding recording. 'Zoolook' was also a clear signpost as to where, musically, Jean Michel would continue to explore over the years. And, in 2007 he has certainly managed to create much versatile & interesting music throughout the course of his highly respectable career - the recent 'Teo & Tea' proves hands down that he's still got it, even if it does take a few listens to really get into.

Yep, 'Zoolook' is up there with other such pioneering "art" recordings as Eno & Byrne's 'My Life in the Bush of Ghosts'; Summers & Fripp's 'I Advance Masked'; and anything by Neu!, to name but a few. I'm certainly glad I didn't leave it any longer before experiencing this sagacious masterwork!!!"
-MARTY (30/07/2007)