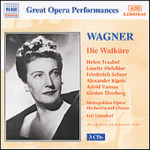 House, New York, The opera - Die Walkure - was well enough known to the theatre and radio audiences that day, but this particular performance was eagerly anticipated as it saw the role debut of Helen Traubel as Brunnhilde - itself an auspicious enough occasion. Making his first Met appearance in his role that day was Alexander Kipnis, singing Hunding, a part in which he had already been acclaimed in several European opera houses.

"Two memorable nights at the opera captured for posterity and each enshrining a cherishable partnership between the incomparable Melchior and a great soprano. At super-bargain price¡Kthis is an essential purchase for Wagnerians."

"This sizzler of a Die Walküre, one of the finest of the opera's many vintage broadcasts from the Met stage, has everything going for it. Let's start with the women. Astrid Varnay was an 11th-hour replacement for the indisposed Lotte Lehmann. Making every word count, Varnay's big voice welds Sieglinde's bottled-up passion and Wagner's urgent lyricism with riveting authority. You'd never know that this inexperienced 23-year-old singer had never before sung on stage. As Fricka, the great mezzo Kirsten Thorborg finds a vulnerable subtext beneath her character's 'morals police' surface. As for Helen Traubel's Brünnhilde, you'd have to look far and wide today for a voice as seamlessly modulated and effortless. What can anyone add to all the praise bestowed upon Lauritz Melchior's honeyed, baritonal Siegmund, in prime voice? Yes, he milks the pair of 'Wälses' in Act 1 to, well, Wagnerian length! And why not? After all, was Rockefeller ashamed of his millions? Alexander Kipnis' statuesque, resplendent Hunding is one of the best on record. Sadly, Friedrich Schorr no longer commands the ringing tone and support that distinguished his pre-war Wotan recordings.

"Under Erich Leinsdorf's disciplined baton, the Met Orchestra emerges as an equal character in the drama. The string playing sings with tender inflection, and the most complex scoring is cogently contoured, even at Leinsdorf's sometimes-breakneck tempos. The sound is quite good for an AM radio aircheck--about equal to what HMV's engineers achieved in the late 1920s. Save for a big cut in Wotan's Act 2 monologue, the opera is performed complete. If you're a historic Wagner maven, you'll easily find shelf space for this enticing bargain."