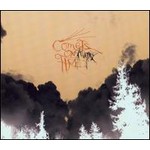 Harnessing the most crucial elements of freeform classic rock, AM gold, and the never-ending, occasionally psychotropic possibilities of their combined instrumentation, Comets On Fire have returned with their fourth album.

Two full years after the dazzling acid-dredged, sonic song mash-up that was Blue Cathedral, Comets on Fire return, all members intact -- despite many solo projects in the intervening years -- with Avatar. There are distinct nods to the distant West Coast past on Avatar and yeah, it is a good thing For starters, the double- and even triple-tracking of Ethan Miller's voice on many of these cuts sounds like the triumvirate of Paul Kantner, Marty Balin, and Grace Slick of the Jefferson Airplane!

The rhapsodic clamoring for ecstatic release sound in this method is beguiling, and offset by the sheer acid rock heaviness of the band's instrumental attack. Take the opener "Dogwood Rust" as an example. The cut sounds like it starts mid-jam with guitars soloing, with Ben Chasny and Miller going back and forth. The verse kicks in immediately and the sheer swirl of sound around them forces them to get over the top. The empire of psychedelic sound is formidable, so they have to. Everything from non-descriptive electronic noise, organ, thudding bass throb (Ben Flashman) and clamoring hypnotic drums (Sir Noel VonHarmonson and Utrillo Kushner) are played with force and menace.

Those two guitars are the only real foil for the singers as they collide, counter, meld, and wind around one another with feedback and plenty of bite for seven-and-a-half minutes. By contrast, "Jaybird" begins calmly with the guitars twinning the blues in a riff that leads into the melody line. Sooner rather than later VonHarmonson's drums elevate the entire proceeding, ushering in splattering feedback electronics. Miller's vocals begin almost whispering, holding their own as the entire tune slowly builds into intensity. But the element of song is never lost. Chasny and Flashman hold it still for a moment or two, but the architecture is teetering and it has to flay off into many directions at once because the tune is being torn apart from the inside.

But that's how it is with Avatar: the notion of song comes first in each of these selections. All but one are given room to stretch: the only song here that isn't between six and eight minutes is the wooly, Blue Cheer-like wail of "Holy Teeth." The rest are fire breathers to be sure, but they take their time stoking the blaze. The slow, Quicksilver Messenger Service-esque melody of "Lucifer's Memory," is almost gentle as Kushner's piano and VonHarmonson's skittering backbeat carry Miller's voice -- singing Kushner's lyric -- as subsonic bass, while distorted guitars simply hold back until the cut breaks open in a gorgeous melodic swirl in the middle. The bridge section repeats over and again until, near the end of the cut, it just cracks wide open into the stratosphere without losing its sense of melody or harmony. "Sour Smoke" is a knotty, multi-storied instrumental narrative seemingly driven by one riff until the guitars start to unfold their schematic. The drum pattern keeps it all in one spot though the tune is traveling with twin arpeggios building all over the rhythm. There is a bluesy piano solo covering over a vocal chant hidden in the background; an electric piano covers over the bass and re-creates another layer of the rhythmic trance. Think Quicksilver Messenger Service's "Edward, the Mad Shirt Grinder" and you get an idea.

There is jamming here, but it's scripted, with many parts written in, as the track feels more like a suite than a single song, all of it along a time pattern that changes timbres and tonalities, but never loses its focus to bridge the various harmonic segments. The set closes with Kushner's piano laying out the melodic frame for "Hatched Upon the Age." Miller begins his raspy vocal swell (which at times really does sound like John Bell of Widespread Panic) and the ever-present, overdriven guitar lines enter, sparingly at first under the organ, under the disciplined rocksteady bassline and the meandering piano. But then they cut in, sting, and retreat until they get their moment to explode near the end of the cut. Avatar is the next step from Blue Cathedral, where Comets on Fire are more involved as a band in crafting actual songs, messing around with dynamic and textural tensions, and getting the noise not so much to behave as to move in more controlled directions. It is an absolute gem of an album and an ecstatic listening experience: play very loud, please.

Not only was Avatar worth the wait, but moreover, it is the mark of a band who is singular, taking from the past in order to create something new, something bold, at times accessible, and sometimes ugly, but more often than not, Avatar is stunningly beautiful, even if the definition of that word needs to expand a bit to embrace it.
4 / 5 All Music Guide.