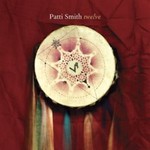 'Twelve' is the album of personally selected songs of singers and songwriters that have influenced the famed singer / songwriter / poet / musician and recent Rock 'n' Roll Hall of Fame inductee, Patti Smith.

1. Are You Experienced?
2. Everybody Wants To Rule The World
3. Helpless
4. Gimme Shelter
5. Within You Without You
6. White Rabbit
7. Changing Of The Guards
8. The Boy In The Bubble
9. Soul Kitchen
10. Smells Like Teen Spirit
11. Midnight Rider
12. Pastime Paradise