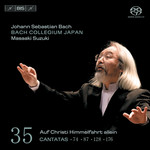 The four cantatas on this disc were all first performed in Leipzig in 1725, during the month of May.

The four cantatas on this disc were all first performed in Leipzig in 1725, during the month of May. Just a few weeks earlier, for reasons unknown, Bach had been forced to abandon his projected chorale cantata cycle, in which each cantata for an entire church year was to focus on the text of a well-known hymn, rather than the gospel reading for the relevant day. He now had recourse to the help of the Leipzig poetess Mariane von Ziegler (1695-1760), who apparently wrote the texts of these cantatas especially for the occasion. They - and the music itself - are meditations on biblical events such as the ascension of Christ and the outpouring of the Holy Spirit on Whit Sunday.

Recent instalments in the Bach Collegium Japan cantata cycle have received the same high praise as the entire series. The German web site Klassik Heute summed it up in its review of Volume 32 (BIS-SACD-1501): 'Once more there is cause to extol the by now well-accustomed merits of Masaaki Suzuki's complete cycle of Bach cantatas: a profound knowledge of style, a multifaceted art of phrasing, and perfectly-judged choices of tempo and musical character have been the distinguishing features of this series since its inception.' The same disc caused klassik.com, another German web site, to exclaim: 'You don't need to have volumes 1-31 - this disc can stand on its own as yet another completely successful Bach interpretation.' The following volume (Volume 33, BIS-CD-1541) was made Disc of the Month in BBC Music Magazine, whose reviewer wrote: 'Suzuki responds magnificently to the musical challenges, and his Bach Collegium to the staggering technical demands… The Bach Collegium chorus, just eight voices in addition to the soloists, contributes to the clarity of texture. Every contrapuntal line is distinctive - a tribute, too, to the sound engineering.'