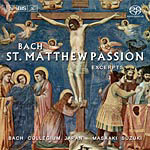 Recorded in March 1999 at the Kobe Shoin Womens's University, Japan

That's good marketing and provides the listener with a variety of choices to suit different circumstances. Given that the complete version is 166'43" long, many will prefer the typical excerpt format with 81'18" of music. Like any précis, the trade-off for time saved is some original content lost.

For the sake of review convenience this new release will be treated as autonomous.

St. Matthew Passion is the apotheosis of its genre. This is highly religious music centring on the very core of Christian belief - the story of the events leading up to the crucifixion (Passion- from the Latin patior, 'I suffer') of Jesus Christ. But then much of what Bach wrote has a strong religious focus and without this inspiration his music may have not reached the same lofty heights.

St. Matthew Passion was written during Bach's period in Leipzig, and the text taken from the Martin Luther version of St. Matthew's Gospel, chapters 26-27. Bach borrowed words and sometimes melodies from others in the writing of this work. He and his librettist C.F. Henrici interpolated a series of "breathing spaces" in the form of original Lutheran hymns. "O Haupt voll Blut und Wunden" (O Sacred Head sore wounded) which recurs throughout the work is not from the pen of Bach at all!

The genius of Bach is further manifested in the recitatives. These would normally have been accompanied by a single instrument, but in this instance have a particularly distinctive feature in that whenever Jesus is speaking, Bach places a "warm halo of strings" around Him, except as He speaks His final words.

Masaaki Suzuki and the Bach Collegium Japan are no strangers to those who love the music of Bach and appreciate outstanding performance of his work. Currently Suzuki has released about half (26?) of the discs required to complete the Cantatas. This series has received constant accolades as new additions appear. Suzuki's recordings of the St. John Passion and Christmas Oratorio received awards from the Gramophone magazine.

This recording of the St Matthew Passion embodies all those ingredients that have made preceding releases by Suzuki and the Bach Collegium Japan so popular and well received; the ideal combination of superb singing, beautiful instrumentation and appealing interpretations.

First is the exquisite "touch' that Suzuki gives the performance. This is challenging to articulate but reminiscent of what one hears listening to Maria João Pires play a Chopin nocturne or Julian Bream playing anything.

The second is probably a product of the first. In comparison with other favoured versions such as that of John Eliot Gardiner (Archive 429 773-2) or Philippe Herreweghe (Harmonia Mundi HM 1676.78 - 1998 version) a strong sense of reverence pervades the entire performance. Doubtless Bach strove to incorporate this vital sentiment - profound respect mingled with love - into his original but the subliminal effect is easily lost through interpretation. Even in those sections that require strong dynamic contrasts this focus persists and the overall result sounds a little more restrained than the favoured nominated versions. Some have overlooked the contextual importance of this and referred to Suzuki's interpretation as being of introverted character manifesting general blandness.

Criticism has also been levelled at the performance of Nancy Argenta (soprano) but this writer is struggling to empathise, also preferring the use of female voice in those solo areas to which it has traditionally been assigned, over male voices. It must however be agreed that a poor performance by a soloist can dampen enthusiasm for a particular version of any work; conversely an outstanding performance can be an important factor in establishing favoured ranking. For example, in similar vein, the magnificent rendition of "Laudamus te" by Brigitte Fassbaender from Eugen Jochum's recording of Bach's Mass in B Minor (1982) has yet to be excelled and enhances the overall personal ranking of this version, albeit outdated in some ways.

Suzuki adheres to the performance practices of the period including the most appropriate instrumentation. This factor may be highly complementary to the concept of conveying a spirit of reverence throughout the music. It may also be a reason why it is not so evident in performances where strong departure from such practices occurs.

It is possible that those with acute empathy for the source of inspiration on which Bach drew, will have not only a strong musical appreciation for this version, but a greater emotional attachment.

This is a splendid performance of St Matthew's Passion. It is not necessarily better than favoured versions such as those by Gardiner or Herreweghe but it is different in a very positive and moving way. The overall performance, combined with different presentation options, make it a serious contender for first choice."
- MusicWeb March 2005