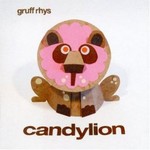 "I listened to this one at first because I was taken by the cover and hoped and wished that the music would match it. It did…. and then some! A real Welshman from Wales and member of Super Furry Animals, this second solo album from Mr. Rhys invites you into a world of interesting beats, acoustic guitars, glockenspiel, bells, whistles and a plethora of ideas that just sound endless. The lure of throwing a red herring into the arrangements is rarely resisted, making it such an adventure to listen to. Watch out for the drum loop on "Lonesome words”. Damn.'
- Ed

'Candylion' took form in the spring of 2006 over a fragmented 2 week period at Gorwel Owen's Ofn studio in Llanfaelog, Wales. "My ears were happily ringing from a few months touring with the Super Furry Animals and I had a batch of mellower acoustic songs I wanted to record quickly and get out of the way before the next speakerblowing SFA record. Once in the studio however I got carried away and found myself in a nostalgic mood, pining for some of the music I grew up listening to” explains Rhys.

"A lovable affair”
- NME Album of the Week