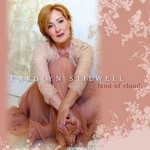 'Land of Clouds' is an album of haunting vocal melodies and synthesized music, with elements of folklore, poetry and Celtic influences delicately woven through it. Carolyn Stilwell uses her voice as an instrument, layering tracks with her own backing vocals, using both high ethereal notes and rich deep harmonies over the melody lines.

The title track is about the migration to New Zealand of all its various peoples. It starts with the arrival of the Maori and of the deep spiritual regard with which they hold the land of New Zealand, "land at the end of the sea, land of clouds, shrouded in mystery, calling to me". It then speaks of the arrival of the missionaries and the first European settlers and ends with "riding the stars through a purple night, earth seems so far and it feels just right" as the latest waves of immigration from China, Korea, Taiwan and beyond arrive here by plane on their own journey.

A New Zealander of French, English and Irish descent, Carolyn Stilwell acknowledges the influence of all those strands of her identity, which come together to produce songs and melodies that are uniquely New Zealand but also draw on Celtic traditions.

Though Carolyn was writing her own material from her late teens most of this remained unheard until she was 30 and living in London. There she fronted the '90s Celtic band Loose Goose and released two albums, which were taken up by a major distributor after seeing her perform at Glastonbury.

'Land of Clouds' is an hour of ethereal, and yet on occasions deliciously quirky, music from one of New Zealand's singer / song writing talents.

Songs For You (Incl Ave Maria & How Great Thou Art)