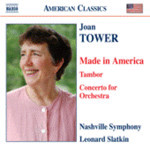 "I would highly recommend this CD especially for the Concerto for Orchestra, a piece that deserves to be performed and heard more frequently, and also for Made in America, which has received considerable exposure across the USA."
(MusicWeb Sept 2007)

Hailed as one of the most successful woman composers of all time in The New Yorker magazine, Joan Tower was the first woman ever to receive the Grawemeyer Award in Composition in 1990. She was inducted in 1998 into the American Academy of Arts and Letters, and into the prestigious Academy of Arts and Sciences at Harvard University in the fall of 2004. The same year, she was honored by Carnegie Hall with an all-Tower concert as part of their Making Music Series. In 2006 she received an Honorary Doctorate from the New England Conservatory. Since 1972 Tower has taught at Bard College where she is Asher Edelman Professor of Music. She is Composer-in-Residence with the Orchestra of St. Luke's (since 1997) and the Deer Valley Festival in Utah (since 1998), a position she also held with the Saint Louis Symphony Orchestra (1985-1988) and the Norfolk Chamber Music Festival (1995-2003). She will be Composer-in-Residence with the Chamber Music Society of Lincoln Center in 2007-08 as one of the many celebrations across the country in honor of her seventieth birthday. Tower has recently added "conductor" to her list of accomplishments, leading eight of the Made in America orchestras, as well as undertaking other engagements around the country.

Joan Tower 's bold and energetic music, with its striking imagery and novel structural forms, has won large, enthusiastic audiences. From 1969 to 1984, she was pianist and founding member of the Naumburg Award-winning Da Capo Chamber Players, who premiered many of her most popular works. Other groups that have commissioned her include the Emerson, Tokyo and Muir String Quartets, Kalichstein-Laredo-Robinson Trio, American Brass Quintet, Chamber Music Society of Lincoln Center, Carnegie Hall, and the summer music festivals of Aspen, Summerfest La Jolla, Chamber Music Northwest and Music from Angel Fire. Her first orchestral work, Sequoia, quickly entered the repertory, with performances by orchestras including Saint Louis, New York, San Francisco, Minnesota, Tokyo NHK, Toronto, the National Symphony and the London Philharmonia. A choreographed version by the Royal Winnipeg Ballet toured throughout Canada, Europe, and Russia. Her tremendously popular five Fanfares for the Uncommon Woman have been played by over five hundred different ensembles.

Imagine what would happen if the entire classical music world banded together. What sort of power could they wield? In a project spearheaded by the American Symphony Orchestra League and Meet The Composer, and fueled by funding from Ford Motor Company Fund and the National Endowment for the Arts, a group of 65 smaller budget American orchestras did just that in 2001.

This collective power was not about financial gain or political clout. These orchestras joined forces to create something that was uniquely theirs, and in the process the largest commissioning consortium in history was born. The result of their ground-breaking collaboration was a new composition of pure Americana by Joan Tower.

Tower was keenly aware that the work would be played by many different orchestras, often comprised of part-time musicians of varying ability. She knew she should write a piece that was satisfying to play and just challenging enough, but not impossible to execute for the average player, and, since it would be heard across the country, it had to appeal to city-dwellers, suburban music-lovers and rural residents alike. Tower succeeded in creating an accessible composition that has broad appeal and yet is not trite or derivative. From its premiere by the Glens Falls ( New York ) Symphony Orchestra on 2 October, 2005, up to Juneau ( Alaska ) Symphony's performance in June 2007, Made in America has been performed in all fifty states and thus enjoyed unprecedented exposure for a brand-new composition.

Based on our nation's unofficial anthem, ' America the Beautiful', Made in America is both a piece about and for America. It is not a set of variations, but more like a fantasy on the theme, in which Tower text-painted the words that we know so well - depicting color and landscape in her orchestration. Tower was influenced by the time she spent in her childhood living in Bolivia, growing up around a lively but impoverished culture. Returning to the United States at the age of eighteen made her consciously appreciate the basic luxuries and freedoms Americans are entitled to. She writes:

When I started composing this piece, the song ' America the Beautiful' kept coming into my consciousness and eventually became the main theme for the work. The beauty of the song is undeniable and I loved working with it as a musical idea. One can never take for granted, however, the strength of a musical idea as Beethoven (one of my strongest influences) knew so well. This theme is challenged by other more aggressive and dissonant ideas that keep interrupting, interjecting, unsettling it, but ' America the Beautiful' keeps resurfacing in different guises (some small and tender, others big and magnanimous), as if to say, "I'm still here, ever changing, but holding my own." A musical struggle is heard throughout the work. Perhaps it was my unconscious reaction to the challenge of how do we keep America beautiful, dignified and free.

Tower's upbringing around the drum-rich music of South America could account for her self-proclaimed passion for percussion, which is particularly apparent in Tambor. The title itself is the Spanish word for drum, and the music is, like many of Tower's compositions, rhythmically driven.

This fifteen-minute work features the percussion section, whose members essentially have three functions inside the orchestra: to underscore the different timbres and rhythms of other sections of the orchestra, to act as counterpoint to the orchestra, and to serve as sectional soloists in several minor and major cadenzas throughout the work.

While I was writing this piece, the strong role of the percussion began to influence the behavior of the rest of the orchestra to the point that the other instruments began to act more and more like a percussion section themselves. In other words, the main 'action' of the work becomes more concerned with rhythm and color than with motives or melodies (though these elements do make occasional appearances here and there).

The work is in two continuous parts, beginning with layers of unisons punctuated by gossamer figures in the upper winds. The first instrument to be featured is the French horn, for which Tower composed a free cadenza. Later, there is an extended lyrical section in which the cello section is featured alone. Toward the end of the first half of the piece, two trumpets are heard in a challenging rapid interplay of motives.

Part two is announced by an extended solo for first and second violin, followed by English horn and tuba solos. A rising five-note chromatic line acts as connective tissue, building to a climax five minutes before the end in which nearly the entire orchestra is playing block chords.

Concerto for Orchestra was commissioned in 1991 by a consortium of orchestras, the St Louis Symphony, the New York Philharmonic, and the Chicago Symphony, and dedicated to the visionary philanthropist Charles Grawemeyer.

Concerto for Orchestra
Made in America
Tambor