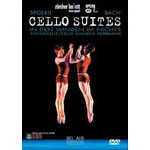 G :-
The choreography mixes solos, pas de deux, trios and ensemble work. Beginning and ending with a near-identical solo, the cycle is dominated by circularity. The duets are virtuoso gems, athleticism made dance.

"When I'm working, I let the music come to me. The choreography is a dialogue with the music. I love all kinds of music and I've written ballets using works by all sorts of composers, but my relationship with Bach is something special. For me he remains a very contemporary composer. He sets my head straight. He lets me concentrate."
- Heinz Spoerli

To the term "choreographer" Heinz Spoerli prefers "dance maker". In the few short years since he took charge of the Zurich Ballet, the company has gained an international reputation, with the austere yet poetic In den Winden im Nichts (Cello Suites) among its flagship works.

Following on the success of his adaptation of the Goldberg Variations, Spoerli turned to that other Bach masterpiece, the Suites for Solo Cello, offering his abstract vision in three stunningly beautiful dance episodes.

The choreography mixes solos, pas de deux, trios and ensemble work. Beginning and ending with a near-identical solo, the cycle is dominated by circularity. The duets are virtuoso gems, athleticism made dance.

Its subtle play on balance and the relationship between bodies and light, the symmetry and asymmetry of the ensemble parts, its purity of movement and its sheer energy make this a ballet of remarkable density, depth and theatrical beauty.

The Bach Suites are played here by Claudius Herrmann, solo cellist with the Zurich Opera Orchestra, in a rendition that does full justice to their choreographic potential.

Proust, or How The Heart Skips A Beat (complete ballet recorded in 2007) Choreography by Roland Petit

The Bolt (complete ballet recorded in 2006)