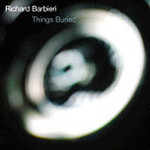 Amazingly, considering his musical career has spanned 4 decades, 'Things Buried' from 2005 was Richard Barbieri's debut solo album. Said career has taken him from the seminal recordings he made with Japan in the seventies right through to the current worldwide success he is enjoying with Porcupine Tree.

Fear of a Blank Planet