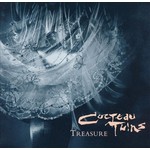 The opening two numbers of Treasure are simply flawless, starting with "Ivo," where gently strummed guitar and low bass support Fraser's singing; then suddenly added, astonishing chimes and steady percussion build up to a jaw-dropping Guthrie guitar solo. Topping that would be hard for anyone, but in "Lorelei," the Twins do it, with an introductory, breathtaking guitar surge leading into one of Fraser's best vocals, compelling in both its heavenly and earthly tones and rolls.

Not a word may be understandable, but it isn't necessary, while the music, driven on by a pounding rhythm, is as perfect a justification of digital delay pedals and the like as can be found. As Treasure continues, the accomplished variety is what stands out the most, whether it be the gentle, futuristic-medieval pluckings on "Beatrix," the understated moody washes and Fraser whispers on "Otterley," the upbeat guitar lines of "Aloysius," or the slightly jazzy touches on "Pandora."

The concluding number ends the record on the peak with which it began. "Donimo" starts with a mysterious mix of mock choir sounds, ambient echoes and noises, and Fraser's careful singing before finally exploding into one last heavenly wash of powerful sound; Guthrie's guitar, Raymonde's steady bass, and drum machine smashes provide the perfect bed for Fraser's final, exultant vocals. Treasure lives up to its title and then some as a thorough and complete triumph.
4.5 / 5 All Music Guide.