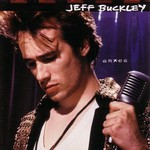 There is no other word for it but "Masterpiece!"

Sadly, this is the only complete studio release from the late singer, guitarist and songwriter. In a cruel twist of fate, Jeff's life ended at just age 30, only two years older than his folk/rock singing father, Tim, was when he died.

Both Buckley's had four to five octave voices and utilised every bit of their amazing abilities. Jeff however was also a brilliant guitarist, creating spacious, atmospheric sounds to accompany his incredible singing. When he recorded 'Grace' he wanted to create a variety of songs with different feelings for each. He succeeded and in doing so made one of the greatest debut albums of all time.

There are powerful rock pieces (like the title track) stunning intricate arrangements, such as "Dream Brother" (about Tim) and breathtaking cover versions. (He borrowed Leonard Cohen's "Hallelujah" and made it his own - guaranteed to move every listener to their very soul).

"This beautiful-looking guy with a fur coat and mad, curly hair walked in. He went to the bar and got a pint of Guinness, then plugged in his Fender and began to sing. Everybody was completely blown away. Who was it? It was Jeff Buckley."
- Dougie Payne, Travis

"Jeff Buckley was one of the greatest losses of all."
- Jimmy Page, Led Zeppelin

"Jeff Buckley was a phenomenal talent and his concert at St. James Theatre, Auckland on 9th February, 1996 was easily one of the best performances I have ever witnessed."
- Geoff Dunn, Marbecks