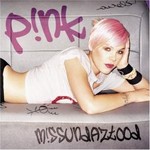 Whether you were one of the fans who feared or one of the detractors who hoped that Pink would fail to follow-up her smash debut album, Missunderztood serves notice that the lady with the pink hair (yes, it still is) is more than just a one-shot flash in the pan. The grooving pop of the title-track is less hip-hop oriented than Pink's previous hits, sounding more like an amiable collision between Smash Mouth and Sugar Ray. "Don't Let Me Get Me" and "Just Like a Pill" tread even closer to pop-rock territory, the latter bearing an anthemic quality that wouldn't sound out of place on an Alanis Morissette album. The appropriately titled "Get the Party Started is a funky party anthem, and the rap-flavored "Respect" is a modern urban update on the classic Aretha theme. Whether she's making her way through pop, rock, rap, or R&B, Pink struts confidently enough through Missunderztood to assure her admirers that she intends to stick around for quite a while.