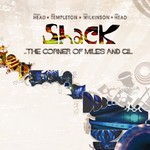 Shack
On The Corner Of Miles And Gil

Three years after the enervated Here's Tom with the Weather, Shack return with only their fifth album in an 18-year career. (And that doesn't even count leader Mick Head's former band, the Pale Fountains.) The title may name-check Gil Evans and Miles Davis, whose collaborations were the pinnacle of 1950s cool jazz, but On the Corner of Miles and Gil is no more jazz-influenced than any of Head's previous albums. This is to say, the occasional stray muted trumpet figure or Wes Montgomery-style guitar line floats through these songs, but overall, the late Arthur Lee is a much bigger influence. Love's trademark commingling of ominous, slightly paranoid lyrics and deceptively pretty melodies has always been Head's primary starting point, but this album is Shack's most vital and musically impassioned album in at least a decade. Check out the epic guitar-noise freakout that ends "Black and White" or the acid rock guitars plus syncopated horns of "Funny Things" for immediate proof, or the Forever Changes-style waves of orchestration and backing vocals that build and recede throughout the multi-part centerpiece track, "Miles Away." Elsewhere, the hushed near-whispered vocals, arpeggiated guitar lines, and pinging synth noises of "Finn, Sophie, Bobby & Lance" combine to create an atmosphere of unsettling menace. After a number of years in which Head's well-reported personal problems and dependencies overshadowed his increasingly infrequent albums, On the Corner of Miles and Gil is an unexpectedly vibrant return to peak form. ~ Stewart Mason, All Music Guide