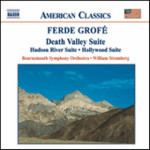 "Boisterous performances one and all accorded immensely vivid engineering. Light-music fans will find plenty to enjoy here - and the price is right, too!"
--Review by Andrew Achenbach, Gramophone, November 2002

"Ferde Grofe, if familiar to you at all, will forever be remembered in classical music as the composer of the Grand Canyon Suite, first performed in November of 1931 by his then current employer Paul Whiteman to much critical acclaim. Subsequently, it has been played and recorded by hundreds of orchestras throughout the world, ranging from Arturo Toscanni and the NBC Symphony Orchestra to a great interpretation by Andre Kostelanetz and his orchestra to Eric Kunzel and the Cincinnati Pops complete with digitally recorded thunderclaps to heighten the "Cloudburst" movement. This reviewer will always remember Grofe for his brilliant orchestration of Rhapsody in Blue, the composition of George Gershwin, which some will argue as the finest work of the 20th century. However, Ferde also loved to write other suites, and this Naxos release features three different genres written between 1935 and 1954. Much of his work is directly linked to his life experiences with many of the things he wrote about, resulting in program material filled with melodies and orchestrations complete with sound effects that conjure up all sorts of scenes in your mind if you allow it to. This is the kind of music to lay back in your chair with your feet up and just relax and enjoy. This is landscape music in the true meaning of the now over used phrase.

Hollywood Suite has nothing to do with any melodies, scores, or films of the time but does feature a story which Grofe briefly explains and then proceeds to write, arrange, and orchestrate a wonderful suite around. It begins simply with a janitor sweeping up from the night before beautifully reproduced with brushes on the cymbal and a cool theme first on the bassoon and then the clarinet. The extra girl appears and the theme now carried by the strings plays a waltz like melody of the girl waiting to be discovered but alas no. Bustling about, the carpenters and electricians prepare the set for the big dance number in a American In Paris style orchestration frantic with brass and percussion. The "Production number" or the dance is a big band style number with the swinging saxes and clarinets, sliding bones, slam bang drumming and even tap dance clicking. If Ginger Rogers doesn't cross your mind you don't know who she is! The finale has a touch of classical chords as the production winds down to the carpenters and electricians again (one can hear the strains of the style of Rhapsody in Blue) to finally the extra and the sweeper doing his thing once again. Written in 1935 with a ballet in mind it was eventually constructed into a suite in 1938.

The Hudson River Suite, was an idea that the conductor Andre Kostelanetz had and approached Ferde with it in 1954, something Grofe found interesting enough to come up with quite a varied suite. Yes it is similar in style and flavor to his beloved Grand Canyon Suite but upon more serious listening there truly is a distinct difference to it from other suites he composed. "The River" with its great melody depicts the flowing of the great river. "Henry Hudson" is a patriotic stoic piece of the famous navigator. "Rip van Winkle", something which Grofe began work on in 1932 as an idea, is complete with dog barking and bowling sound effects! "Albany Night Boat" is a lush romantic track except for a moment or two of dixieland. "New York" depicts the hustle and bustle of the city in a short concluding track.

Death Valley Suite was actually given its premiere performance at Desolation Canyon in California in front of 65,000 people! As was the case with Hollywood Suite Ferde wrote a little story telling the tale of the early pioneers attempting to make it across the Valley of Death. The parching sun, Indians, cracking whips, whirring arrows, and swirling wind are just some of the things depicted in the suite. Being an old trombone player I can tell you that there is some very nice work in the "'49er Emigrant Train" track. When they finally find water in "Desert Water Hole" some of the favorite Americana songs are orchestrated into a nice small medley. Grofe loved percussion and certainly put it to excellent use in this suite. The final track "Sand Storm" has a similar style to "Cloudburst" on Grand Canyon Suite but still is one of the best tracks to listen to. The swirling sand and wind come through loud and clear!

Some of the music could have very easily found its way into a cartoon as the easy going carefree style complete with sound effects really tell great stories. Eleanor Thomason did an excellent job of capturing all of the nuances of the percussion and should be commended for her fine engineering. This was a first class job by Stromberg and the Bournemouth Symphony and has my highest recommendation!"
--Review by Tom Kiefner, Goldenscores.com

"This is American light music at its best, to which the British players respond as though the 'Pond' didn't exist. Wessex Hall in Poole, Dorset, provides an ideal acoustic for Stromberg and the BSO (vivid brass and percussion in a well-balanced sound picture) who, when required, can swing with the best of them. The producers, Marina and Victor Ledin, also provide extremely good booklet notes. Highly recommended."
--Review by Jeremy Nicholas, BBC Music Magazine, January 2003

"Grofé's innate flair for tuneful melodies and evocative scene painting surfaces in all three of these slight but entertaining works. The Hollywood Suite is a delicious ballet that portrays the behind-the-scenes activity in a California film studio. Conductor William Stromberg and the Bournemouth Symphony Orchestra dig into this score with a relish for the jazzy style and blaring tunes.

Stromberg makes a genial guide through these American musical landscapes. He finds a rich palette of colors in Grofé's portraits of life and nature on the Hudson River and Death Valley."
--Review by Robert Baxter, Courier-Post, October 18, 2002

"The creation of wide-screen descriptive suites without the movies exemplarized by the popular Grand Canyon Suite is also heard in these three rarely-heard Grofe works. The six movements of the Hollywood Suite - originally a ballet - get about as specific as any composer could: Sweepers, The Stand-In, Carpenters and Electricians, and for the finale - Director/Star/Ensemble. Ever since he orchestrated Gershwin's Rhapsody in Blue Grofe demonstrated an aptitude for symphonic jazz, and traces of it are heard in these works. The Hudson River Suite has movements for Henry Hudson and Rip Van Winkle, including musical effects of the latter's dog. Obviously not masterpieces, but great fun delving into this nostalgic Americana, and at the reasonable price well worth the investment."
--Review by John Sunier, audaud.com

"Boisterous performances one and all accorded immensely vivid engineering. Light-music fans will find plenty to enjoy here - and the price is right, too!"
--Review by Andrew Achenbach, Gramophone, November 2002

"Grofé's Hollywood Suite very enthusiastically played by the Bournemouth SO is worth double the price of this album alone. And yet there is more! The Hudson River Suite is another wonder from the magic colourful pen of this American composer of the musical travelogues while The Death Valley Suite is another extraordinarily realistic sound portrait.

Magnificent over-the-top; but hugely enjoyable, vividly descriptive music played with all the stops out by film music conductor Stromberg and recorded in some of the best Naxos sound I have yet heard. Don't hesitate, buy it before it sells out!"
--Review by Ian Lace, Film Music CD Reviews, October 2002, Editor's Recommendation