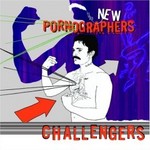 "More cinematic than 'Twin Cinema', more cohesive than any other record released this year, 'Challengers' is so very good it almost compels you to think in the cliches of music criticism."
- Popmatters (9/10)

"…their biggest grower yet, a dense collection of carefully constructed pop and brain power pop."
- All Music Guide (8/10)

Formed back in '97 in Vancouver, BC they have amassed a swag of underground classics among their recorded output on the albums 'Mass Romantic' ('00), 'Electric Version' ('03) and 'Twin Cinema' ('05). The New Pornographers have received critical and public acclaim whilst continuing to enjoy bigger {& taller and smarter} audiences.

'Challengers' continues the New Pornographers' signature multi-layered sound with greater epic sweep and wider sonic diversity. Less frenetically jaunty than its predecessors but still encapsulating pure summer joy, this album will impress the existing fans and convert the uninitiated. Recorded for the first time largely outside bassist John Collins' Vancouver JC/DC Studio, 'Challengers' is their most organic-sounding record, reflecting a conscious decision to use less "beepy synth" and almost entirely "real" instruments, including an entire string section - who have played with Sufjan Stevens.

Main songwriter and de facto band leader, A.C. ("Carl") Newman has enjoyed a fruitful musical career, from the seminal Sub Pop band Zumpano in the '90s to his phenomenal solo debut 'The Slow Wonder' in '04.

Part of this band's charm is the fact they also have other incredibly strong songwriters on board, such as Dan Bejar - who usually records under the name Destroyer and rarely tours with the New Pornographers - the incredibly talented, regular contributor Neko Case, and Kathryn Calder, originally added due to Case's other commitments, but now firmly established.

The most appealing aspect of this band is the multi-layered vocal harmonies so everyone gets a shot at the limelight. Their live shows are fully-fledged fun affairs, with audiences hopping on the spot and singing their lungs out. On a previous excursion to the UK they played the Shins-curated All Tomorrow's Parties Festival - a musical match made in heaven.

"…a staggering masterclass in indie-pop songwriting that will make your brain melt and send firecrackers 'round your heart."
- NME

1. My Rights Versus Yours
2. All The Old Showstoppers
3. Challengers
4. Myriad Harbour
5. All The Things That Go To Make Heaven And Earth
6. Failsafe
7. Unguided
8. Entering White Cecilia
9. Go Places
10. Mutiny I Promise You
11. Adventures In Solitude
12. Spirit Of Giving