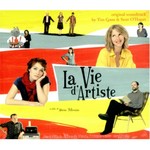 Known for their work with Stereolab and The High Llamas, Tim Gane & Sean O'Hagan evoke graceful, cinematic sounds on this outstanding film score. The second disc of this set features music that didn't get used in the movie.

Tim Gane & Sean O'Hagan evoke graceful, cinematic sounds on this outstanding film score. The second disc of this set features music that didn't get used in the movie.

Gane and O'Hagan (respectively of Stereolab and High Llamas fame) put their heads together to pen the music for a French comedy 'La Vie d'Artiste'. This is the first time they've worked together as a double act since their one-record band, Turn On, released a self-titled album in 1996.

When originally approached by the director, Marc Fitoussi (a huge fan of both the High Llamas and Stereolab), he wanted them to deliver something that captured what he loved about both bands and reached the heights of classic film composers like Ennio Morricone, François de Roubaix and Piero Picconi. A big challenge and one that took a lot of time to achieve, but they rose it and delivered both an apt and outstanding original score.

The film itself follows the life of three separate artists - lives which inadvertently affect one another: a singer wishes to break free from her days of waitressing, a teacher strives to be a writer (finally driven to stealing the work of a pupil) and a would-be Broadway actress feels frustrated in her cartoon voiceover day job. The soundtrack, a humble touch of everything we ever loved about Stereolab, gracefully reflects the cast as they each strive to create their own destinies.

Disc 2:
Bonus music from Tim Gane & Sean O'Hagan, which was not featured in the 'La Vie d'Artiste' film