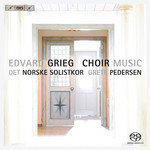 Edvard Grieg is the most important Norwegian composer of the later 19th century, a period of growing national consciousness. As a child, he was encouraged by the violinist Ole Bull, a friend of his parents, and studied at the Leipzig Conservatory at his suggestion. After a period at home in Norway he moved to Copenhagen and it was there that he met the young composer Rikard Nordraak, an enthusiastic champion of Norwegian music and a decisive influence on him. Grieg's own performances of Norwegian music, often with his wife, the singer Nina Hagerup, established him as a leading figure in the music of his own country, bringing subsequent collaboration in the theatre with Bjrnson and with Ibsen. He continued to divide his time between composition and activity in the concert-hall until his death in 1907.

"A superb choir with a warm, clear sound does full justice to these luscious choral works and arrangements of pieces by Grieg" (Classic FM)

"I have been particularly, err… enchanted by this disc of Grieg's choral music - both original and as arranged for choir. It starts with an arrangement of the popular "At Rondane", op.33, No.2 (originally for voice and piano) which is plain gorgeous in its moody way and resonant, in full-bodied choral guise. Two religious songs were arranged for mixed choir by Grieg himself of which "Withered, Fallen - At the Bier of a Young Wife" sounds a bit predictable but touching in its cathedral-like piety. In this song, as in "Ave, Maris Stella" or indeed most of the other works on this glorious sounding SACD, the non-Norwegian ear will always pick up a certain preciousness: that silver-voiced, Christmas-choir touch with scents and touches of mulled wine, snow boots, and blond locks under a woollen hat. This is perhaps particular to this reviewer, but usually when I hear Norwegian choirs sing so enthusiastically, it's Christmas."
(MusicWeb Fed 2008)

"The Nordic Soloists Choir present an impeccable selection of Grieg songs-and it doesn't get better than this. Follow along in the PDF texts as they highlight overlooked masterpieces like "Landkjenning (Land-Sighting)" and the "Ave maria stellis." This is just gorgeous music, for anybody who wishes the Lyric Pieces were sung. If the performances can be bettered, I'd love to hear it. " (MusicWeb Nov 2013)

Jeg lagde mig så sildig (I Lay Down So Late)

I Folketone (In the Folk Style)

Complete Solo Piano Music (12 CDs for the price of 3)