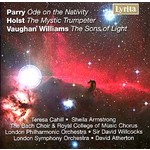 "Lyrita here put on the map three neglected scores from the British choral tradition and they do so in magnificent style."
(MusicWeb Sept 2007)

"This was the first recording of "The Sons of Light". When I reviewed the second recording, by David Lloyd-Jones on Naxos, I found the Lyrita preferable, with more presence to the recording, more vital conducting and better choral diction. At that time there still seemed to be no prospect of the many Lyrita treasures ever seeing the light of day again. Now things are changing and this is the recording to get...If Parry is at his best, so is Willcocks. It's a thrilling performance from a great choral conductor. This is the only recording of the piece so far, but now it's available again we hardly need another...Outstanding recordings, as always with Lyrita, and notes by Ursula Vaughan Williams, Bernard Benoliel and Imogen Holst."
(MusicWeb Sept 2007)

"Lyrita here put on the map three neglected scores from the British choral tradition and they do so in magnificent style."
(MusicWeb Sept 2007)