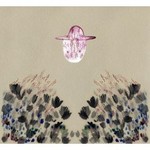 One of the most fascinating, unpredictable and inspiring artists of his generation continues to surprise and delight. This album has a nocturnal feel with performances that respectively evoke hushed, twilight atmospherics or boisterous, late night partying.

Devendra Banhart exploded on the international music scene in '02 quickly winning a coterie of devoted fans as well as an unusually hefty amount of critical kudos right from the outset. The critics' acclaim and the size of his audience both at home and abroad earned by his debut 'Oh Me Oh My The Way The Day Goes By The Sun Is Setting Dogs Are Dreaming Lovesongs Of The Christmas Spirit' was impressive to begin with and increased dramatically with each subsequent release: '04s 'Rejoicing In The Hands, Nino Rojo' and '05s 'Cripple Crow'.

For the writing and recording of 'Smokey Rolls Down Thunder Canyon', Banhart set up house in a rustic hillside home in the longstanding bohemian enclave of Topanga, North of Los Angeles. Noah, Devendra and engineer Beauraymond Fletcher created their recording studio in a second floor recreation room with a panoramic view of the canyon.

At the same time it's a more focused effort. Where 'Cripple Crow' sounded like Devendra trading licks with a never ending caravan of passing musical gypsies, 'Smokey…' is very much the work of a band, Devendra's regular touring line-up strategically complimented by a few very special guests.

The vocal arrangements are noticeably more intricate and ambitious with lush harmonies running through many of these numbers. The instrumental performances are comfortably loose but in-the-pocket a rich blend of acoustic and electric guitars, understated drumming and gentle percussion, diffident bass and a variety of downhome keyboards subtly colored with the occasional lightest touch of strings or woodwinds.

Banhart has emerged as one of the most fascinating, unpredictable and inspiring artists of his generation and with 'Smokey Rolls Down Thunder Canyon' he continues to surprise and delight an ever-increasing audience of fans and critics alike.