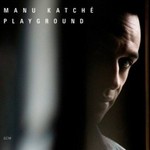 Manu Katché became famous thanks to collaborations with Peter Gabriel ('So' & live performances) and for the Amnesty International World Tour (with Gabriel, Sting and Tracy Chapman). His main talent: blending a worldwide variety of musical styles into the regular drumset with great musicality, style and passion.

'Playground' is the brilliant second ECM album by French-African jazz drummer Manu Katché. Recorded in New York's Avatar Studio in January 2007, 'Playground' picks up where the best-selling 'Neighbourhood' left off:

"Neighbourhood was a beginning," says Manu Katché, of his widely-praised ECM leader debut which received the Jahrespreis der deutschen Schallplattenkritik (yearly award of the German Record Critics), an album-of-the-year prize from France's Jazz Magazine (Disque d'émoi de l'année), and numerous other awards. "It was a meeting. Since then, we've been on the road together, established some codes in the way we interact. And I've found out more about the other guys' playing abilities, especially Marcin and Slawomir and I knew we would work more together. So the music for Playground was concepted also with them in mind. In this sense, the new disc is a continuation. It's exploring similar areas, but I think there is more coherence, more ensemble togetherness... and I've also grabbed a bit more space for me and the drums, while on Neighbourhood I'd made the decision to keep myself mostly behind the soloists."

With a revised line-up and a tighter focus Katché's group draws on a web of proven playing associations, with the unique qualities of Manu's drumming simultaneously triggering fresh responses from each of the players.

Manu Katché's approach sets him apart from most contemporary jazz drummers. His agile rhythms build patterns, frameworks of pulses that nudge and lift the horn players, or lock into deep grooves with piano and bass. The grooves on Playground are infectious, but more than that, the compositions are brilliant - thus showing a different side of Manu Katché, as both composer and arranger - and many of his pieces deserve to become jazz standards.

My Foolish Heart: Live at Montreux

Being There
more suggestions…