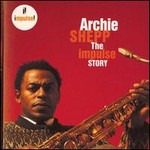 Archie Shepp's volume in The Impulse Story series, with liner notes by Ashley Kahn, author of -The House That Trane Built: The Impulse Story, is arguably the best and most representative of any of the editions in it. These ten cuts capture Shepp's many faces. There's his wonderful look inside the music of his mentor John Coltrane ("Naima" from Four for Trane), through to his gaze at the jazz tradition (Duke Ellington's "Sophisticated Lady"), to bossa nova (a very unique read of "Girl from Ipanema") to the weighty concerns of his own compositions that engaged everything from the avant-garde "Les Matin des Noires" to politics ("Malcolm Malcolm - Semper Malcolm"), to R&B and soul ("Damn If I Know" "Mama Too Tight," and "Attica Blues"). While certain albums are not represented here - the magnificent Magic of Ju-Ju being one - the breadth and depth of Shepp's true genius is all here. That said, it is a shame that many of his albums recorded for Impulse (the classic Fire Music and Magic of Ju-Ju just to name two) are currently out of print. Of all the volumes in this fine collection, Shepp's stands, with Alice Coltrane's as the very best in that it gives a true introduction to an artist often misunderstood, but during his tenure for this label, he was creatively unstoppable. ~ Thom Jurek, All Music Guide