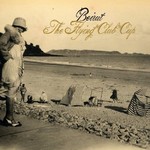 Caught between the soaring spectacle of the instrumentation and the beautiful intimacy of the songs on 'The Flying Club Cup', there is a love letter - a heady missive to the joie de vivre that lights up our existence.

Zach Condon aka Beirut released his debut album 'Gulag Orkestar' in May '06, and in the short time since has been wholeheartedly embraced by indie music lovers everywhere, as online raves led swiftly to reverential fandom. The young American multi-instrumentalist formed a band and has performed throughout the US, Western and Eastern Europe, these shows suiting his wonderfully charismatic songs beautifully, while he proved himself as talented a bandleader as a composer.

New songs were written, album songs reworked and Beirut's shows quickly reached dramatic heights more exciting than they had any right to deliver - feel free to do an online search of live reviews for proof! Inspired by an obscure photo from 1910 showing hot air balloons taking flight only metres from the Eiffel Tower - duly pasted to the wall throughout recording - his 'Flying Club Cup' album is a homage to France's culture, fashion, history and music.

Yes, 2 years ago, Condon was immersing himself in Balkan folk, but 2 years is a long time when you're 21 years old, so he moved West, soaking up the music of Francois Hardy, Charles Aznavour and most notably, Jacques Brel (a huge influence on Scott Walker and also Mark E. Smith of The Fall), and working on his conversational French, especially between-song-banter at shows. But although the album, like all of Beirut's music, radiates affection and nostalgia for the culture that inspired it, it was recorded far from its emotional epicentre.

Initial work was done to computer in a nondescript Albuquerque office space with the now 8-piece Orkestar - an integral part of Beirut's identity - while further work was undertaken by Condon and multi-instrumentalist Owen Pallet aka Final Fantasy. And so it was that Beirut got to record at the Masonic church studio owned by Arcade Fire and even more excitingly, populated by their many obscure instruments. The initial plan to add final touches to the songs developed into something more ornate, with lush string sections and a spot of singing added, and songs twisted into new and different shapes and shades.

So here we have 'The Flying Club Cup' and caught between the soaring spectacle of the instrumentation and the beautiful intimacy of the songs, there is a love letter - a heady missive to the joie de vivre that lights up our existence. Listen closer and you also hear the further emergence of a singular musical talent, an artist not bound by cultural borders and led wherever his heart travels.