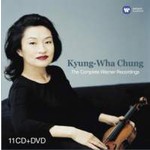 Kyung-Wha Chung, an artist of passionate intensity and probing intellect, is one of the great violinists of the last 50 years. This 11-CD collection, which unites recordings made between 1978 and 2000, showcases the different facets of her art: as a concerto soloist; in works for solo violin and piano, and as a chamber musician. Also included in the box is a DVD of the Beethoven Violin Concerto, recorded in Amsterdam with the Royal Concertgebouw Orchestra and Klaus Tennstedt.

Kyung-Wha Chung, one of the great violinists of the past 50 years, first made musical headlines in 1967, when she won the prestigious Leventritt Competition in New York. Today - following an enforced five-year break from performance, the consequence of an injury to her left hand - she continues to live up to her reputation as a passionate and probing virtuoso.

When, at the end of 2014, Chung played in London for the first time in over a decade, the Sunday Times wrote: " ... Still a sound of utter resplendency, a brilliantly shining tone right across the instrument; a projection to make light of the acoustic distances to be travelled; an ardour, physical, musical and spiritual, that seems undimmed by years ... extraordinary music-making."

This 11CD collection gathers together all the recordings Kyung-Wha Chung made for EMI (now Warner Classics) between 1978 and 2000, with the majority dating from the years after 1988, the year she signed an exclusive contract with the label. The anthology showcases the different facets of her art: as a concerto soloist, collaborating with such conductors as Simon Rattle, Riccardo Muti and Klaus Tennstedt in works by Beethoven, Brahms, Dvořák, Bruch, Bartók and Vivaldi; in works for solo violin and piano, playing Brahms' three sonatas with pianist Peter Frankl, and in a wide-ranging album of short pieces - from Bach through Kreisler and Massenet to Szymanowski and Stravinsky - in partnership with pianist Itamar Golan; and as a chamber musician, in piano trios by Mendelssohn and Schumann (with Paul Tortelier and André Previn) and by Beethoven, Tchaikovsky and Shostakovich (with her sister Myung-Wha Chung as cellist and brother Myung-Whun Chung as pianist). The box also includes a DVD of a 1989 video recording, made at a performance at the Amsterdam Concertgebouw, of the Beethoven Violin Concerto; as in the audio-only recording in the collection, the Royal Concertgebouw Orchestra is conducted by Klaus Tennstedt.

Kyung-Wha Chung was one of the first musicians from South Korea to achieve an international reputation. She began studying the violin at age six and at the age of twelve went to the USA, where she studied at the Juilliard School in New York with Ivan Galamian (described in the New York Times as "maybe the greatest violin teacher in history''), also receiving coaching from Joseph Szigeti and Szymon Goldberg.

In recent years she has herself become a professor at the Juilliard School, and in South Korea has taught at Ewha University and been active as co-artistic director of the Great Mountains Music Festival.

Describing her approach to playing in an interview with The Strad magazine in 1989, Chung said: "As Szigeti taught, there are colours everywhere in music, and every piece has its own atmosphere. After all, everything is related to nature, all the composers worked with nature and nature is filled with every kind of colour. Each player has his own way of gauging the intensities, but every sensitive musician will somehow translate these colours into sounds ... I've learned that ego isn't the determining factor ... the music must come from a deeper source. You must let the music speak through you, and experience it completely. There is no short cut to musical integrity. You must do it honestly."

"This CD would make a worthy addition to the collection of any Romantic concerto enthusiast, with the Beethoven in particular ranking among the most enduring and sensitive performances I have had the pleasure to come across." (MusicWeb on the Beethoven/Bruch)

"The players respond to Rattle's hypercharged sense of urgency with a performance of white-hot intensity. Kyung-Wha (Chung's) is a beautifully crafted performance."
***** Five Stars (Pick of the Month) BBC Music Magazine on the Brahms

"A confident reminder of why Chung is so highly placed in the pantheon of violinists." (MusicWeb May 2015)

Tchaikovsky:
Piano Trio in A minor, Op. 50 'In Memory of a Great Artist'
Chung Trio