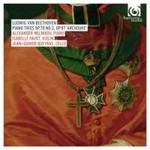 By giving the stringed instruments the status of genuinely equal partners with the piano, it was Beethoven who gave the piano trio the form it was to retain throughout the 19th century. This album presents the composer's last two works in the genre, Op.70 No.2 dedicated to Countess Marie Erdödy, and the celebrated 'Archduke' trio, which marked the final public appearance of its composer.

Three eminent Beethovenians, Isabelle Faust, Jean-Guihen Queyras and Alexander Melnikov join forces here in performances that aim to highlight Beethoven's humour in their interpretation and set a new benchmark in the process. Their next project will be Schumann Piano Trios to be recorded in May and released in 2015.

"A cellist who tends towards introversion; a fortepianist who tends the other way. Put them together and something magical happens within the tensions they engender."
GRAMOPHONE MAGAZINE AWARD NOMINATION 2014

'The Op. 70 No. 2 'trio without a name' has too often lurked in the shadows: here the formidable Faust, Queyras and Melnikov on fortepiano make an indelibly convincing case for it, revealing a work of Apollonian grace and subversive wit. As for their Archduke, has it ever received a performance of such inspired subtlety?'
BBC Music Magazine WINNER 2015 - Chamber

"This ensemble is something of an A team. All play period instruments on this alluring disc, making for some ravishing textures" Sunday Times, 2nd February 2014

"It's not just that ideal balance between the instruments, so faithfully caught by the Harmonia Mundi engineers, which makes this new recording so recommendable. The three performers combine so well that although they aren't a 'regular' trio with a name, they have played together often enough, as in the Faust/Melnikov series of the complete Beethoven Violin Sonatas and in Schubert to ensure that this glorious free-wheeling performance is likely to become my listening choice in future, perhaps even in preference to the Beaux Arts and Florestan Trios recordings." (BBC Music Chamber Choice April 2014)

"The first thing you notice here is the timbre of the fortepiano, lightening the overall texture: in Melnikov's hands it sometimes sounds like a gypsy dulcimer...The "Archduke" receives a delightfully intimate performance: the voicing of each instrument comes across with equal clarity, and the great Andante cantabile casts its spell afresh." (Financial Times)

"this new recording joins the others at the top of the tree and is worth buying even if you have one of them because of its unique selling point - the employment of a fortepiano." (Recording of the Month MusicWeb March 2014)

"Melnikov works wonders with his 1828 Graff piano, managing to make it less clattery and more piano-like than in most other fortepiano gypsy dulcimer...The "Archduke" receives a delightfully intimate performance: the voicing of each instrument comes across with equal clarity, and the great Andante cantabile casts its spell afresh." (Financial Times)