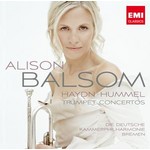 "Trumpeter Alison Balsom's bold and brilliant playing engenders a fresh-eared listening of the warhorse Haydn and Hummel concertos. Balsom's robust phrasing combined with a confidence that never turns cocky reminds us of the trumpet's history in battle and regalia. But it's not all fanfare and bluster as Balsom produces beautiful, round tone throughout the range, even in the instrument's challenging low notes. There's also much warmth and feeling in her playing, very different from the the reserved cool of Wynton Marsalis in his debut recording featuring these same works. The program steps backward to the baroque era with the Torelli and Neruda concertos, both appealing works featuring masterful trumpet writing. Again, Balsom dispatches these with winning panache. The Deutsche Kammerphilharmonie Bremen provides bracing and lively accompaniment under Thomas Klug's leadership, something you can easily hear as EMI's vivid recording places Balsom in a natural-sounding perspective with the orchestra. There's plenty to enjoy here--certainly for trumpet aficionados, but those just who enjoy great music making will be pleased as well." (10 sound 10 performance ClassicsToday)

"The conductor-less Deutsche Kammerphilharmonie Bremen are equal partners in this endeavour: they are fleet, crisp and totally attuned to Balsom's playing." (MusicWeb Jan 2009)

"Occasionally a player comes along who turns all the preconceived ideas about their instrument on their head, and reinvents the repertoire. … Alison Balsom is a virtuoso player and a natural, gifted communicator, but what really comes across is her sheer exuberance and joy in making music." Classic FM Magazine

"The first movement of the Haydn is a model of concision which Balsom plays gloriously" Classic FM Magazine, December 2010 ***

"Haydn and Hummel composed their concertos for Anton Weidinger's newfangled keyed trumpet, whose timbre was appreciably softer than the natural trumpet (contemporaries likened it to an oboe or clarinet). More than any performance, Alison Balsom brings out the mellow, even veiled, colouring of so much of the writing.
Where clarion brilliance is in order she can peal out with the best of them. But what lingers in the memory is the lyrical grace of her phrasing, and her delicacy of shading.
In the entertaining Hummel Concerto, with its palpable Mozart cribs, she mingles tonal subtlety and swagger in the opening movement, spins a refined, beautifully modulated line in the slow movement, and makes the finale's pyrotechnics properly dazzling. The spruce Deutsche Kammerphilharmonie match her all the way in sensitivity and rhythmic verve.
Moving back in time, Balsom savours the bold, bugling fanfares of Torelli's miniature concerto and makes a persuasive case for a pleasant, if hardly distinctive, mid-18th-century concerto by the Czech Johann Baptist Neruda, written for the corno da caccia but forgivably pilfered by trumpeters hard-up for solo concertos. In sum, a stunning recital from a poet of this traditionally martial instrument." Gramophone Classical Music Guide, 2010

"…a stunning recital from a poet of this traditionally martial instrument." Gramophone Magazine, Awards Issue 2008

The Italian Job: Baroque Instrumental Music from the Italian States