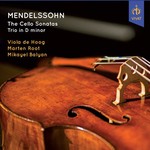 Effervescent in their outer movements, lyrical and whimsical in their inner sections, Mendelssohn intended his cello sonatas to show complete parity between piano and cello.

De Hoog is partnered by the astonishing Armenian pianist Mikayel Balyan, who plays an 1847 piano made by Mendelssohn's favourite maker, Érard. The combination of this fine instrument with Balyan's sensitive musicianship brings a rainbow of sonorities and colours.

Mendelssohn's virtuosic piano writing has rarely been heard with such clarity on an original instrument:cascades of notes fly from Balyan's nimble fingers.The release also includes the first recording on period instruments of Mendelssohn's own arrangement of his famous Trio in D minor, Op.49, re-scored for flute, cello and piano. Viola de Hoog and Mikayel Balyan are joined by eminent Dutch flautist Marten Root. One of the staples of nineteenth-century chamber music is heard in completely new colours.

"This enterprising disc, on period instruments (including an Erard, the piano that Mendelssohn loved), features the two cello sonatas (the earlier B flat is a charmer) and - an intriguing rarity - the D minor trio with flute, not violin, arranged by him for an English publisher." Sunday Times