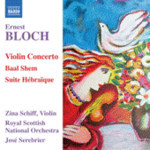 "This disc has to be given a real thumbs-up, giving us as it does all Bloch's major works for violin and orchestra in thrilling performances and with demonstration sound quality. Don't hesitate."
(Recording of the Month MusicWeb Dec 2007)

"This is a wonderful disc. Zina Schiff plays this music with exceptional passion and commitment, which is really what Bloch is all about. Her tempos in the outer movements of the concerto are a touch more relaxed than the competition. If you're looking for an inexpensive single disc containing all of Bloch's major works for violin and orchestra, let this release be your choice. I wonder if Schiff also plays the viola? I'd love to hear these forces in Bloch's spectacular Viola Suite."
(10/10 ClassicsToday.com July 2011)

A precocious violin talent, Bloch left home at the age of seventeen to study with the illustrious Belgian violinist and composer Eugène Ysaÿe, who regognised his pupil's extraordinary creative potential and persuaded him to pursue composition. Bloch's Violin Cocnerto, an underrated rarity, is one of his most important works of the 1930s. Although Bloch attributed the major themes in the Concerto to American Indian songs heard on a visit to New Mexico, he also described the work as portraying 'the complex, glowing, agitated soul that I feel vibrating through the Bible'. The Suite hébraïque, which draws on traditional melodies to evoke a sense of nostalgia, and the exotic tryptich Baal Shem (Three Pictures of Chassidic Life), are indelibly associated with Bloch's 'Jewish works'.