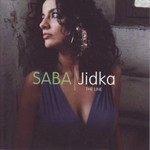 On her musical debut, Saba from Mogadishu explores the divide between Somalia and Italy, mixing acoustic guitars and koras with traditional African beats and contemporary percussion.

Born in Mogadishu to an Italian father and Ethiopian mother, Saba has come to represent the meaning of African and European cultures. As an actress she starred in a long running TV drama, playing the role of a policewoman fighting against the prejudice of her colleagues, while dealing with issues such as illegal immigration from Africa.

On 'Jidka: The Line' - her musical debut - she explores the divide between Somalia and Italy with a rare sensitivity and gentle humour, mixing acoustic guitars and koras with traditional African beats and contemporary percussion.