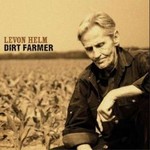 'Dirt Farmer' - the first studio recording in 25 years from the legendary singer and musician from The Band - won "Best Traditional Folk album" at the 2008 Grammy Awards.

It's a major landmark on a remarkable journey for Levon Helm. "The last few years have proven to me that we truly live in an age of miracles," writes Levon in the poignant liner notes. After arduous treatments for throat cancer that took away his singing voice and a fire that consumed over eighty percent of his recording studio, Helm was amazed to find both restored.

"Helm's drawling howl is heavy with the outrage and sorrow of someone with a deep connection to the land and those who live by it."
- Rolling Stone

"This is Levon's best solo album without question. It's as good as anything that any of them have done since 'The Last Waltz' ".
- Band orator Peter Viney