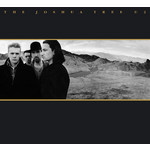 U2's 'The Joshua Tree' has been meticulously re-mastered from the original analogue master tapes, to mark 20 years since its release.

In 1987, 'The Joshua Tree' reached Number 1 around the world and won a Grammy for "Album of the Year", while U2 won the Brit Award for "Best International Act" and Time Magazine put the band on its cover, proclaiming them "Rock's Hottest Ticket".

Including the singles "I Still Haven't Found What I'm Looking For", "Where the Streets Have No Name" and "With or Without You", 'The Joshua Tree' went on to sell in excess of 20 million, including achieving 14 x Platinum status in NZ, with sales in excess of 210,000. The album spent 8 weeks at #1 on the NZ Top 40 Charts and a total of 111 weeks on the charts so far!!!

This CD features remastered audio, liner notes by Bill Flanagan (author of 'U2 At The End Of The World') and previously unseen Anton Corbijn photos.

" 'The Joshua Tree' will prove a braver and better record than anything else that's likely to appear in 1987."
- NME

"More than any other U2 album, though, 'The Joshua Tree' has the power and allure to seduce and capture a mass audience on its own terms. Without making a show of its eclecticism, it features assertive rock ("Where the Streets Have No Name"), raw frenzy ("Bullet the Blue Sky"), delicacy ("One Tree Hill"), chugging rhythms ("I Still Haven't Found What I'm Looking For") and even acoustic bluesiness ("Running to Stand Still") - all of it unmistakably U2."
- Rolling Stone (1987)

1. Where the Streets Have No Name
2. I Still Haven't Found What I'm Looking
3. With or Without You
4. Bullet the Blue Sky
5. Running To Stand Still
6. Red Hill Mining Town
7. In God's Country
8. Trip Through Your Wires
9. One Tree Hill
10. Exit
11. Mothers of the Disappeared