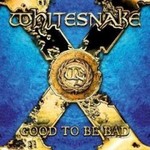 Whitesnake
Good to Be Bad

This is the first studio album from Whitesnake for over a decade! 'Good to Be Bad' is another hard rock masterpiece from Mr. David Coverdale and company.

"It's only April, but Whitesnake has laid down the marker for the best hard rock record of the year; anyone wanting the crown will have to top this excellent effort..."
- San Francisco Chronicle

The legendary Whitesnake are known for creating some of the '80s most memorable arena rock anthems, bic-wielding ballads and scintillating videos - and now they're back for more. This is the first studio album from Whitesnake for over a decade! 'Good to Be Bad' is another hard rock masterpiece from Mr. David Coverdale and company.

These are 11 new, slamming Whitesnake songs which are guaranteed to take their place alongside their multi-million selling catalogue. The tracks, written by Coverdale and guitarist Doug Aldrich (who also co-produced the album with Coverdale and Michael McIntyre) provide a good balance of eight rocking tracks and three epic ballads. David Coverdale feels that 'Good to Be Bad' is the first "real" Whitesnake album in almost 20 years!

'Good to Be Bad' is the bands' 11th album and is vintage Whitesnake - a lean, muscular, melodic rock record - though showing the band has developed a modern, contemporary edge. 'Good to Be Bad' marks Whitesnake's 30th year as a band (though frontman and chief songwriter David Coverdale is the only original member remaining).

Whitesnake of old kept their sound rooted in the bluesy hard rock of Led Zeppelin, Deep Purple (with whom Coverdale sang with, from 1974 to 1976) and late '70s Brit metal, and the current incarnation stays true to those roots. The group also features regulars Doug Aldrich, Reb Beach, Uriah Duffy, Timothy Drury and Chris Frazier.

So how does it rank compared to the trademark Whitesnake sound? Well, guitars don't seem to sound like this anymore, and that's a shame as that solid wall of big fat distorted roar still makes the hair on the back of the neck stand up! Coverdale's voice may be a little lower in the 21st century, but he's still a seriously skilful frontman, emoting, growling and getting heard up above the dense, melodic musical mix.

From huge, strutting anthem rockers to overwrought power ballads, 'Good to Be Bad' showcases one hell of a comeback! Whitesnake is ready to reclaim their hard rock crown... and boy, it sure feels 'Good to Be Bad'.