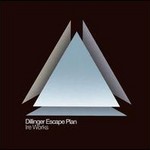 Brutality scientists The Dillinger Escape Plan can't be accused of going soft on this experiment in futuristic chaos. In fact, they're as ferocious and cerebral as ever...

Brutality scientists The Dillinger Escape Plan can't be accused of going soft on this experiment in futuristic chaos, 2007's 'Ire Works'. In fact, they're as ferocious and cerebral as ever, representing a twisted fusion of heart and mind. In many ways the perfect band to score a technological apocalypse, DEP's continued growth and exploration into strange realms of glitch-y electronics and sampled discord may anger some hardcore traditionalists, but open-minded listeners will hear a roller coaster ride into a broken future.

The album opens with the familiar sounding "Fix Your Face", another raging monolith of vertiginous time changes, slashing, disjointed Slayer licks, and Greg Puciato's neck cord bursting roar. And while tracks such as "Nong Eye Gong" and "82588" would easily fit on previous DEP records, others, like the Faith No More-influenced "Black Bubblegum", show the band flexing new pop muscles. "Milk Lizard" looks backward, with horns and piano accenting an otherwise straightforward thrasher, and "When Acting as a Particle" mixes shuddering strings, hissing static, and junkyard percussion to chilling effect. 'Ire Works' is the result of a talented band with restless creativity expanding the boundaries of their sound without softening any edges. It's a difficult balancing act, but one that DEP is obviously up for.

"Weinman's licks and riffs corkscrew out of the speakers, cut against the beat as much as they drive it, and lay down thick melodic foundations..."
-ALTERNATIVE PRESS

"With impossibly visceral, grinding, convulsing riffage bolted onto body-wrenching gargled screams... 'Ire Works' flows as an album in ways DEP have never quite succeeded before..."
-KERRANG