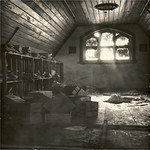 Described by Radio NZ as "one of the most unique voices in New Zealand popular music", critically acclaimed recording artist Dudley Benson releases his long-awaited debut album - 'The Awakening'.

Following the success of his 2006 sold-out EPs, the former chorister enthralled with pop music brings forth an album augmented by a supporting cast that includes piano, harpsichord, strings and 12-person choir. Coiling around Benson's voice, his arrangements breathe life into the forgotten characters of innocents and scoundrels that haunt 'The Awakening'.

"To try to encapsulate the wide-lensed Southern Gothic dreaming of Dudley Benson's pocket symphonies is to draw up musical fractions. A former chorister in thrall to the charms of pop music, the self-dubbed 'grand naivety' of Benson's music has seen him wrestle with his origins over a series of acclaimed EPs, uncovering the stratums of genealogy through signature layers of voice and chamber instrumentation.

On the debut LP The Awakening, Benson plays narrator to his Canterbury tales, augmented by a supporting cast of richly textured piano, harpsichord, strings and choir: they coil around his voice, breathing life into the forgotten characters of innocents and scoundrels that haunt The Awakening, and culminate in a sound that is entirely Dudley Benson's own: full but succinct, contemporary but aged.

Having seeded and nurtured the song cycle that makes up The Awakening, Benson is now ready to present the album to others and other possibilities. The mysteries the young Dudley saw in the Port Hills have now been committed to tape, giving voice to the ghosts of Etienne Francois and Minnie Dean, who in turn have been given the careful task of translating the Antipodean dreaming of Dudley Benson."
- Sam Wicks